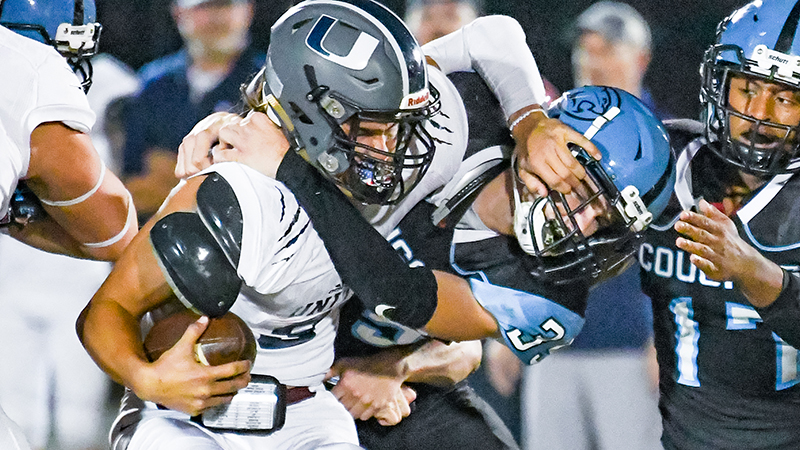 The Cougars fell behind 20-0 quickly and played catch up the rest of the way, ultimately falling 56-20.

Unity scored first on a 48-yard touchdown pass, but the Cougars appeared poised to answer right back. Ephraim Snyder made an incredible run on a fourth and inches to move Lafayette Christian inside the Unity 5-yard line.

Unfortunately for the Cougars, the drive stalled from there. Unity’s defense held and Lafayette Christian turned the ball over on downs.

A couple of plays later, Unity threw a 90-yard touchdown pass to make the score 14-0.

LCS again crossed midfield on its next drive, but the drive again stalled. Quarterback Andrew Hough was sacked on fourth down, turning the ball over on downs.

A 21-yard yard run around left end gave Unity a 20-0 lead, but Snyder and the Cougars responded right back. Snyder went around right end for his own 50-yard touchdown that made the score 20-6 with 8:52 left in the second quarter.

The Cougars then recovered an onside kick, and for a brief moment, it looked like they could inch their way back into the game.

However, the Unity defense rose up and forced Hough to fumble. Unity scored a couple of plays later on a 6-yard touchdown pass, making it 28-6.

LCS responded again as Hough threw an incredible pass to Braden Firth for a 65-yard touchdown to make the score 30-12 with 3:14 left in the second quarter. Hough was under heavy pressure but somehow got the ball away to a wide-open Firth, who outran the Unity defense to the end zone.

Unity still had plenty of time to drive the field and slowly, but methodically, did so. With just a few seconds left in the half, a quarterback sneak from the 1-yard line made it 36-12 at the half.

Unity scored on its first two drives of the second half to make the score 48-12 at the end of the third quarter.

LCS scored its final touchdown on a second Hough pass to Firth, while Unity tacked on one more score.

Despite the loss, the Cougars will host a playoff game Friday.