Athlete of the week: Multi-sport athlete Corriah Williams does it all for the Grangers 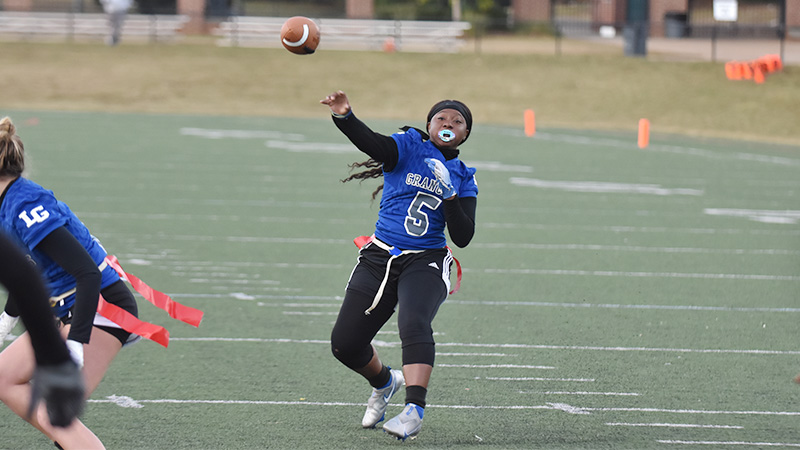 If there is a field or a court in LaGrange, odds are Corriah Williams has played on it. The LaGrange High senior is known for her athletic ability and is keen to show across a multitude of sports.

While she won athlete of the week for her three touchdown performance against Greenville, she is far from just a football player. She suits up for the LaGrange softball team and the Granger basketball team.

“Flag football started a little earlier this year and then I will go right into basketball practice,” Williams said. “It’s tiring (playing all three), but I love doing it.”

This is Williams second year on the gridiron for the Grangers.

“When I came out to practice I didn’t think I would be good at quarterback,” Williams said. “I started throwing the football really well during tryouts. They wanted me to play quarterback and I was unsure at first.”

She has made strides this year. Her connection with wide receivers Sam Cottle and Carlee Roland is special.

“I know those girls are always going to be there for me,” Williams said. “If they drop it, it’s ok because I know they are going to catch the next one.”

This season has been all about progress for Williams. She feels more natural at the position now. It is not just individual progress, she believes the team is progressing as well.

“We have a good group of girls this year,” Williams said. “We have more speed. I feel like we can be great, we just have to communicate more, and do the right things.”

While she came out to have fun, she takes flag football seriously. She is not the only one, as the girls have bought into the new sport.

“I knew it was going to be fun, but I didn’t believe it would be this much fun,” Williams said. “I like the culture and the coaching staff.”

Her ability to both throw the football and run it makes her a thorn in the side of most defenses.

While she was one of the vocal supporters for the flag football team before its inception, her time on the basketball court is what has really molded her at LaGrange. She is the team’s starting point guard.

“I liked to shoot threes and I like to drive into the paint,” Williams said. “I definitely feel most comfortable shooting threes.”

Williams hopes to continue playing basketball after her time at LaGrange high comes to an end. She has eyes on Duke University.

Before she departs LaGrange, she has unfinished business. The flag football season is nearing its end, which means Williams is just transitioning to sports as she is always finding her way towards athletic competitions.

“Basketball is my favorite sport,” Williams said. “I’ve been playing since I was four years old.The game has been great to me.”

With just two regular season games left on the flag football schedule, Williams time suiting up for the Grangers seems to be dwindling, but her time as a Granger will live on forever.