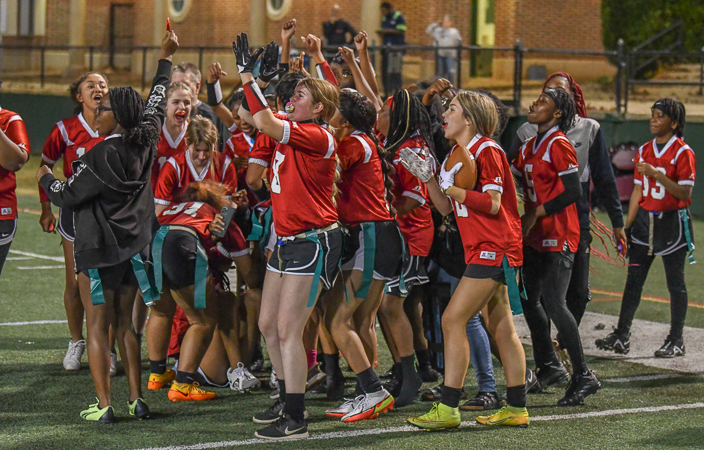 Tuesday was a flag football bonanza at Callaway Stadium. Callaway, LaGrange and Northside converged on the stadium with winning on its minds.

This set up the final game of the day, a showdown between the Grangers and the Cavaliers.

How it got there:

Callaway took a quick 6-0 lead in the opening stages of the first half and looked like they would  add on to it later in the half before Cottle intercepted the pass with 5:30 left in the game with the Cavaliers driving. The Grangers put together a good drive on the ensuing drive as they marched into the red zone. Callaway’s Maddox intercepted a pass with under a minute to play, but it was wiped out by a penalty. This gave the Grangers the ball back and they made no mistake this time as Williams connected with Cottle on a 10-yard touchdown to give the Grangers their first lead of the game (7-6).

The Cavaliers answered the call when Mary Kate Baswell hit Malaysia Parham for a 70-yard touchdown with just 15 seconds left in the first half.

It was not a back breaker for the Grangers who took the opening possession of the second half and scored on a one-yard run by Williams.

LaGrange falls to 3-6 overall on the season and 1-2 in region play. The Grangers are scheduled to play Hardaway and Shaw next Tuesday on the road.

Callaway improved to 4-4 overall and 3-3 in region play. The Cavaliers are set to play Washington and Northgate on the road on Nov. 17 in their final regular season games.