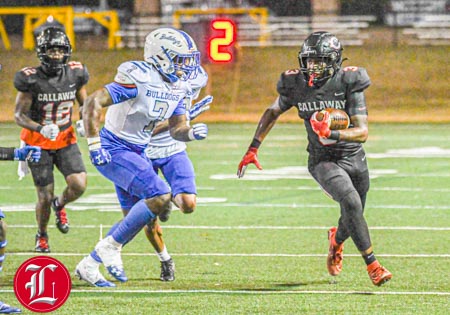 In the bands of tropical storm Nicole on Thursday night, the Callaway Cavaliers dominated Washington 42-20 at Callaway Stadium to advance to their 11th straight second round playoff appearance.

“They have a good football team, and I felt like we stayed the course,” said an ecstatic Pete Wiggins, Callaway’s head coach. “I think our defense also made a couple of big plays and played fast and physically. There are some things that have to be better. We had a bad turnover early.”

The bad turnover he is referencing was on the initial drive of the game — Callaway had taken the ball into Washington territory and a bizarre tipped interception/fumble (it remains unclear which one it was) resulted in the Bulldogs taking the ball all the way back to the house for an early 6-0 lead.

“I think it all starts up front with the physicality of our offensive line,” Wiggins said. “I felt like we won the line of scrimmage. I think we attacked them with our running game.”

The Cavaliers were down their top two running backs going into the game with Qua Whitfield and Jordan King not seeing any action on Thursday. Instead it was Hart, Deontaeus Brooks, and Tyren Buggs who shouldered the workload in the opening round of the playoffs. It was a big responsibility for these three young men and they delivered.

“I’m proud of all three of those guys’ efforts tonight,” Wiggins said. “I’m looking forward to seeing how they can contribute going forward.”

One name stood out in the backfield for the Cavaliers: Brooks.

“We got a big game out of D Brooks,” Wiggins said. “He weighs about 145 lbs, but he plays like he’s 220 lbs. Really proud of his effort. We talked about him at halftime. He’s a big impact player.”

Brooks scored on a two-yard touchdown run to make it 14-6 Cavaliers late in the first quarter before he got another one from about eight yards out with 4:37 left in the second quarter. That was the score at the break after Korey Jackson reeled in an interception on the Cavaliers own 10-yard line with under a minute to go in the first half.

The third quarter was a bit sloppy as a fumble by the Cavaliers on their opening possession of the second half in opponents territory left Wiggins frustrated.

It looked like the Bulldogs might get back into the game after an 85-yard touchdown pass with 4:10 left in the third quarter cut the Callaway lead to 16.

Callaway had the answer when DeShun Coleman scored a 12-yard rushing touchdown on third and goal to start the fourth quarter. Brooks got his third rushing touchdown of the game with 5:34 left. The Bulldogs got a late consolation score on a fourth down run, but it did little to affect the game other than to flatter the away team.

“You want to finish well, but it doesn’t always work that way,” Wiggins said. “We want to finish out the game better going forward, but that’s sometimes how the game goes. We will take a win in the playoffs anytime.”

On a night normally reserved for a packed house, the Callaway Cavaliers had to play in a torrential downpour in front of a sparse crowd. For other teams, it might have affected them, but the Cavaliers have championship DNA and were unfazed by the inclement weather.

Callaway has now won eight games in a row. The Cavaliers will host the winner of Fannin County and Athens Academy next week at Callaway Stadium