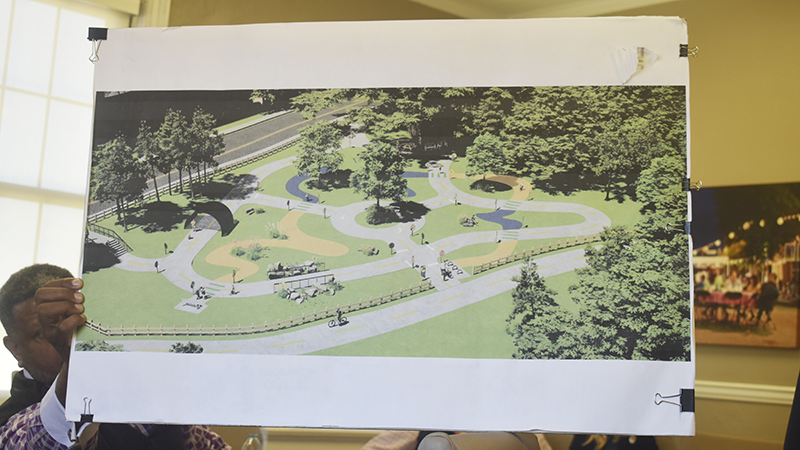 LaGrange is planning a new type of park for the city with its proposed bicycle playground.

City Manager Meg Kelsey provided an update on the bicycle park that was originally a part of the current SPLOST but has since been delayed.

“We always envisioned that it would be off The Thread, but as we built The Thread, we really hadn’t found the right location for it until very recently,” Kelsey said.

The current proposal is to build the bike park on an approximately 1-acre property across from Berta Weathersbee Elementary now that The Thread has been built near the school.

Kelsey said the park will connect with The Thread, but it will be primarily for kids.

“We want to create a playground for kids to learn how to ride their bikes and have a safe space for them to get out,” she said.

Kelsey said the paths on the bike park will help teach kids the rules of the road such as going around a roundabout, stop signs and yield signs and railroad crossings.

Kelsey provided the council with several renderings of the potential park. The project is currently about halfway into the drawings and planning phase, she said.

When the project was originally envisioned it was estimated to cost upwards of $1 million dollars, but since an itemized budget was created, it is estimated to cost about $450,000. The property for the park was also donated to the city, so it will not need to be purchased.

Kelsey said the city is preparing a grant application to pay for the project out of American Rescue Plan funds that were recently released by the governor’s office for parks.

No official action was taken from the council other than signing off on the grant request. Kelsey said she has also spoken with School Superintendent Brian Shumate, as well as Berta Weathersbee Principal Willie Cooks for letters of support for the grant.

Councilman Mark Mitchell said he supports the park but questioned the location.

“My hope is there will not just be one of these,” Kelsey said. “We want more parks connected to The Thread. We want to have nice amenities in the city, so we hope that we’ll be able to replicate that when we find a better, appropriate location.”

Mayor Jim Thornton and Councilman Nathan Gaskin pointed out that all of the city’s parks are for everyone in the city. Thornton added that The Thread was designed so that the parks could be connected via the multi-use trail.

Mitchell said people in District 1 often have to drive several miles to go to a park.

“I just think we think to share some love to District 1 in the near future,” Mitchell said.