Playoff preview: Callaway aims to make it out of the first round for the 11th straight season 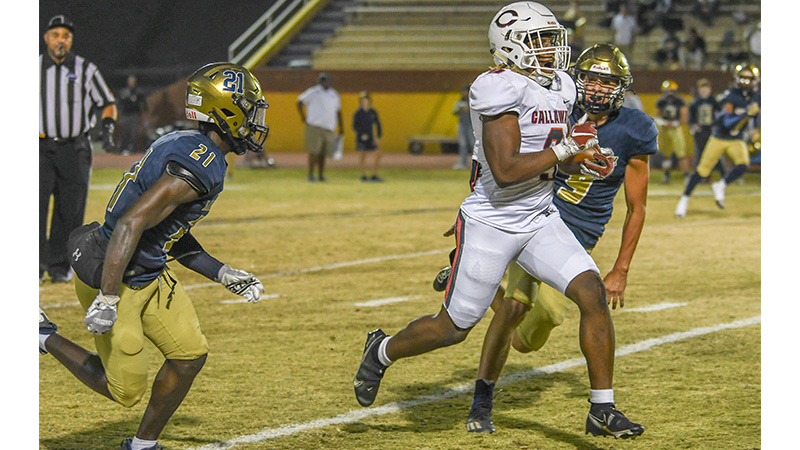 Anybody that doubted the Callaway Cavaliers after their 0-3 start the season have long been proven fools as the Cavaliers have marched to seven straight wins and a region title heading into the state playoffs.

“Coming off the last several games in region play, I feel the confidence of our kids is very high,” Callaway coach Pete Wiggins said. “I’m looking forward to what our guys can do on Thursday night.”

The Cavaliers will be facing Washington (3-6) in the opening round of the AA state playoffs. This season has been a struggle at times for the Bulldogs as they started the season with three straight losses and ended it with two straight — including a 14-12 loss to Mt. Paran in the final game of the season that saw the Bulldogs enter the playoffs as a two seed instead of a three seed.

“They have a really physical football team,” Wiggins said. “They are going to present us with some problems with their physicality.”

The Bulldogs offense has been its downfall. Washington has only scored more than 20 points on one occasion this season — a 42-8 win over KIPP Atlanta Collegiate. The Bulldogs are back in the playoffs after missing the big dance last season despite having a better overall record than they do this season (5-4).

The two teams share just one common opponent this season — Columbia.  In a region game, Callaway blistered the Eagles 32-12 on Sept. 29 while the Bulldogs were defeateed 20-0 on Sept. 1.

“I see that game, and I see the score, but we evaluate them on their last three or four games,” Wiggins said.

The Cavaliers momentum looks like it can continue rolling after Thursday night. One of the potential bumps in the road: injuries.

Running backs Qua Whitfield and Jordan King left last Thursday’s final regular season game with injuries in the first half and did not return. Whitfield could be seen exiting the stadium on crutches last Thursday. It wasn’t clear if they’d be available to play Thursday.

“I don’t want to talk about that and put that out there,” Wiggins said.

The Cavaliers could be short handed in the backfield, but they do have some experienced guys that can call on. Zai Hart took the baton and ran with it last week en route a team high 66 yards against Landmark and added a touchdown for good measure as well. Amarion Truitt and Tyren Buggs are also likely to receive more reps with the expected absence of one or more Callaway running backs.

Whitfield has been the heartbeat of the team so far this season. The senior had 55 yards and two rushing touchdowns against Landmark despite exiting the game early.

Junior quarterback DeShun Coleman will likely have even more responsibility this week if Whitfield is out as he will have to command some of the younger guys that will be getting reps in the backfield.

Callaway never asks too much from the passing game, but it always seems to deliver in key moments. Coleman was 9-for-5 for 86 yards last week. His connection with tight end Exavious Reed is a big part of the Cavalier offense. They connected on two passes for 23 yards a week ago.

Defense has been a strength for the Cavaliers this season — they have not let up more than 20 points on their current seven game win streak.

“I think that we have experience on that side of the ball,” Wiggins said. “Our guys have come together, and we have great continuity after having a few injuries early on.Building confidence with each week has been huge for us.”

The last season Callaway did not advance out of the first round of the playoffs was in 2011. The Cavaliers have made it to at least the quarterfinals of the AA state playoffs for six straight seasons.

Callaway will be looking to make it eight wins in a row on Thursday when Washington comes to town. The game is scheduled to kickoff at 7 p.m at Callaway Stadium.