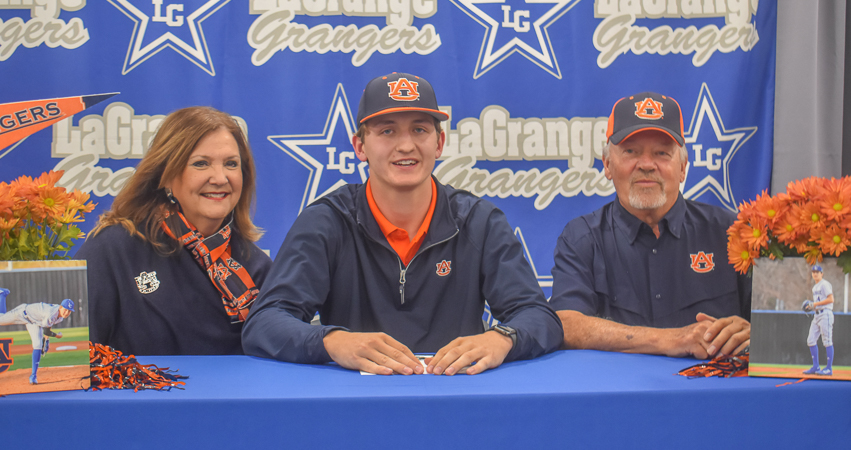 Getting the opportunity to play Division I baseball is a chance few people will ever get to experience. LaGrange High senior Trevor Booton is on his way to being one of a select few as he made his college decision official on Wednesday evening. The soon-to-be Auburn Tiger soaked up every bit of love he got on a special night at LaGrange as a kid’s dream became a teenager’s reality.

“Even when I got my opportunities in and it was 10-0 and we were losing or the game was out of hand, I still came in and did my best to pitch,” Booton said. “I worked to get better, and this made me who I am today.”

The team room at LaGrange High was packed from wall to wall as Booton has made quite the impression during his years in LaGrange.

“It’s great having that group of people around me,” Booton said. “I have received a lot of support from the Granger nation. It was the best crowd. I couldn’t be more proud right now.”

Booton was bolstered by a massive crowd support from family members, coaches, friends, mentors and beyond. None touched quite the emotional nerve like LaGrange baseball coach Donnie Branch, who has been a part of Booton’s development process long before he got to high school.

“He’s a high achiever,” Branch said. “He’s going to be good at whatever he does. It doesn’t matter if he’s a banker, a lawyer, a doctor or whatever he does whether that is a baseball player or something else. He wants to be good.”

The respect is very much a two-way street between player and coach but in reality their bond goes beyond the diamond.

“He’s taught me everything I know. He’s pushed me to be the best that I can be,” Booton said. “He’s definitely the best in the state. There is nobody better than coach Branch. He’s made me who I am today.”

Even though Booton’s decision had long been made up, it was sweet to finally put pen to paper in front of a crowd and enjoy a night that was all his.

“It’s official now, and it’s kind of crazy to be here,” Booton said. “I never thought I would be here a few years ago. If you keep putting in the work, it will pay off.”

He contemplated a few different offers but Auburn just felt like home for him. War Eagle blood courses through his veins. His mother — Ginger Booton — is a graduate of the university, which made the decision that much easier.

“This definitely made her happy,” Booton said with a chuckle. “All my family is from Auburn, so it really made them happy.”

Another factor that made the decision so easy was the fact that Auburn is an elite baseball program. In fact, the Tigers finished runner-up in the Division I College World Series this year.

“Coach Thompson is a great coach at Auburn right now,” Booton said. “They are doing great things down there at Auburn, and I feel like it’s going to be on the best programs in the nation.”

Booton’s time to exchange the blue and white threads of the Grangers for the blue and orange of Auburn is on the horizon, but his time at LaGrange High has not reached its conclusion. Booton will return as the Grangers no. 1 pitcher for one final run at a state title after finishing runner-up in 2022.