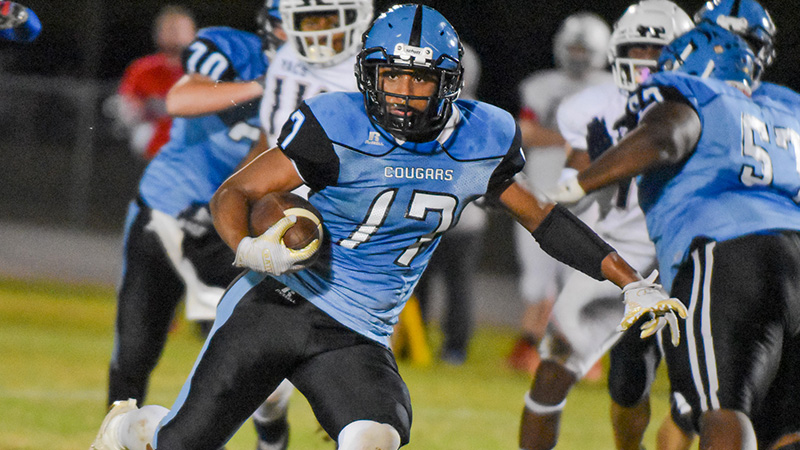 Lafayette Christian dominated the second half to pull away from Young American Christian Friday night in their Georgia Association of Private and Parochial Schools playoff opener 50-34.

If not for the end of the second quarter, the game could’ve potentially been decided earlier.

The Eagles scored twice in the final minutes of the second quarter — including once with 6 seconds left — to tie the game after being down 20-7. In fact, a third Eagles touchdown was actually wiped off the board when a holding penalty called back an interception that was returned for a touchdown on the final play of the first half.

That meant the game was tied 20-20 going into the half.

Lafayette Christian outscored the Eagles 24-0 in the third quarter to pull away.

“We try to instill in them don’t quit, keep fighting, keep your nose to the grindstone and keep on going,” said LCS coach Jarred Pike. “We try to make our players mentally tough.”

Ephraim Snyder scored five touchdowns — including one where he ran over four defenders — to lead the Cougars, but he might miss next week’s game after being thrown out of the game in the final minutes. It was unclear what led to the penalty and decision from the officials.

Pike said he planned to appeal.

“We’ll just have to wait and see, I guess,” Pike said.

Snyder had a huge run to set up a Cougars touchdown to answer back. Andrew Hough threw a beautiful pass — lofted just over the outstretched hand of a defender — to Braden Firth to put the Cougars on the board. The two-point try failed, making it 7-6 YAC.

The Eagles drove the ball down the field again, but the Cougars defense came up big. Stephens was sacked on a third and goal play by Gabriel Bridges, and on fourth down Firth managed to jump up and get his hands on the ball to knock it down, giving the Cougars possession.

Lafayette Christian answered quickly with Hough connecting with Firth for a long completion, moving the Cougars from their own goal line to the Eagles’ red zone.

YAC then turned the ball over on downs — a common theme much of the night — and LCS scored again, this time on a 40-yard reception by Snyder, who ran down the home sideline, while leaving a trail of Eagles defenders in his wake. On the play, Snyder broke through at least four tackle attempts, keeping his feet driving and refusing to go to the ground in the highlight of the night. That score made it 20-7 Cougars, as Snyder also ran in the two-point conversion.

“He’s just a dog. We try to tell him to run behind your pads, quit juking. He’s our best player, he’s a great player,” Pike said. “He runs hard. He broke like four tackles and put a kid in the ground, just running over folks. I’m going to have to find out what his deal is next week and see what we can do.”

Even after that amazing play, the Eagles didn’t go away.

YAC answered right back with a 37-yard touchdown run by Caleb Blunt to make it 20-13 with 2:48 left in the first half.

The Cougars went right down the field again, thanks to a deep pass from Hough to Firth, who refused to go down after the reception. However, a fumbled pitch exchange between Hough and Snyder gave the Eagles the ball back with less than a minute to play in the first half.

Stephens threw to Blunt, who came across the field and was wide open on what amounted to a short pass in the flat, and he ran down the sidelines approximately 50 yards for a touchdown with 6 seconds left in the half.

The touchdown tied the game 20-20, as the extra point attempt was no good.

The Cougars tried to air it out on the expected final play of the half, but the ball was intercepted and returned for a score, only for a holding penalty on the Eagles to bring it back. A unique exchange took place after that with the scoreboard showing all zeroes. The Cougars ran to the locker room but had to be called back out as the Eagles ran one more play — deep in LCS territory. It took about five minutes for action to resume, but the Cougars defense held, leaving the score tied going into the second half.

LCS started the scoring in the second half after an incredible spin move by Snyder moved the Cougars down to the Eagles 11-yard line. Hough ran it in from there, followed by a Snyder two-point conversion, to make the score 28-20 Cougars with 6:52 left in the third quarter.

The Cougars defense again held strong, forcing a fake punt attempt by YAC at their own 35. The Cougars held and Snyder scored on the ensuing drive from 40 yards out to make the score 34-20 with 6:03 left. Snyder’s two-point conversion made it 36-20.

After another stop, Snyder scored again from 17 yards out to make the score 42-20 with 24 seconds left in the third quarter. Firth then caught a two-point conversion to make it 44-20.

YAC answered with 8:55 left to make the score 44-26, and LCS tried to run the clock out. A fumble by Snyder gave YAC the ball back, only for the Cougars to hold again.

Lafayette Christian will travel to Sherwood Christian next week for the second round of the playoffs.

The Cougars had several players out the last time they played Sherwood, a 63-18 defeat on Oct. 18.