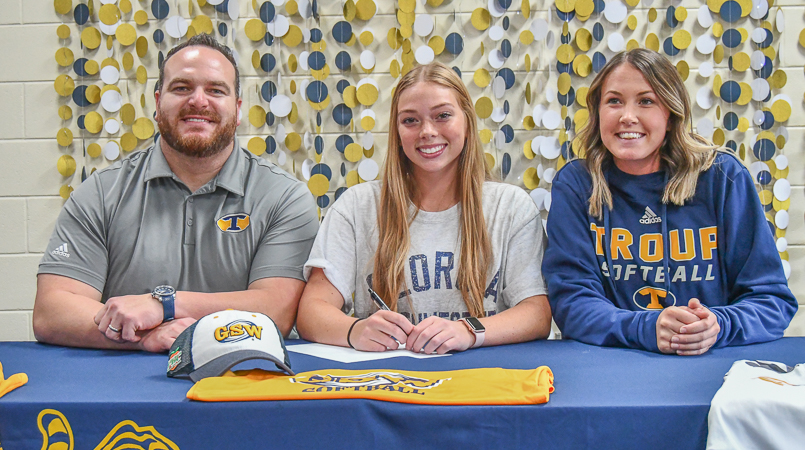 A special day for a special ball player.

Troup senior Maggie McDonald made her collegiate decision official on Thursday when she put pen to paper and announced her decision to play softball at Southwestern State University starting in 2023.

“The memories I’ve made since eighth grade and the people I’ve met through softball over the years are what I will carry with me,” McDonald said.

McDonald’s time on the diamond for The Tigers has reached its conclusion, but her legacy will echo through the halls of Troup High for years to come.

“Maggie was probably the first softball player I got to know on a deeper level,” Athletic director Andre Calhoun said about when he first took the job at Troup. “We used to talk at lunch some and share stories about playing. I know I’m going to miss Maggie on a personal note.”

Her achievements include region pitcher of the year in 2019, region offensive player of the year in 2020 and the coaches award in 2021. She was also named a first team all-region player the final three years of her softball career at Troup.

The individual achievements mean little to her, it is the group achievements that she will remember most, including three straight trips to the sweet 16.

“It was very satisfying even though I always wanted to keep going in the playoffs, but to be able to make it to the sweet 16 three years in a row is a nice feeling,” McDonald said.

Her three most successful seasons at Troup come under the first three years of Ryan Simpson being at the helm of the Troup softball team.

During her senior campaign, she .378 with 19 RBIs and was one of the brightest offensive performers for the Tigers this year. McDonald also gave the Tigers a reliable arm at the top of the order as she finished her senior season with a 3.65 ERA and 33 strikeouts.

The end at Troup is on the horizon for McDonald, but the next destination on her softball journey has been known for a while. Southwestern State really clicked with her earlier in 2022, and she knew from then on that is where she wanted to apply her trade for the foreseeable future.

“It was back in March when I visited there and looked into it more,” McDonald said. “I realized that’s where I wanted to be. When I was 10, I played a tournament there and saw the field and everything and fell in love with the way it looked. I’ve known people that have gone there. It has been one of my dreams to go there.”

Now, it is about taking all that she has learned at Troup and with her travel ball team and translating it to the next level.

“I know that this transition is going to be hard, but I feel like if I bring the qualities that I learned here to there that everything will work out,” McDonald said.

The qualities that McDonald has displayed in high school go far beyond her talents on a softball diamond.

“She’s enrolled in all of our advanced placement and move on when ready courses,” Troup principal Nicki Watts said. “She is one of the most kind, humble and hard working people that you could ever possibly meet, so not only has she been an asset to the team and coaches but to this building.”

McDonald was a leader for the team. The Tigers had an older experienced team this season, but even then, they still needed a leader and McDonald was exactly that for this team.

“This is the first group of seniors that I’ve watched grow from 10th graders to seniors,” Simpson said. “Maggie has been a big part of this team. I don’t know what we would have done without her in situations on and off the field.”

McDonald will be walking the half of Troup High for a little longer yet. Soon she will be trading in one blue and yellow jersey for another.

“I will be keeping my blue and yellow next year,” McDonald said. “That part is very exciting, but it is sad to leave this stage behind, but you always have to be ready for that next chapter.”