Troup survives New Hampstead to advance to second round of playoffs 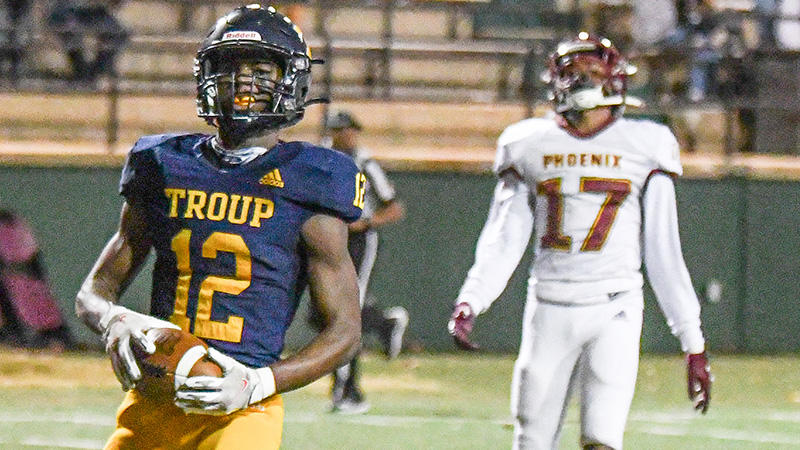 The margins are razor thin once the playoffs start and that proved true on Friday night at Callaway Stadium as the Troup Tigers survived and advanced to the second round of the AAAA playoffs with a 36-29 victory over New Hampstead.

“We were trying to patch it together,” Troup coach Tanner Glisson said. “We are missing a couple guys with injury and had a couple of guys go down in the game.The big deal is you can fix everything tomorrow but the scoreboard, and we won the scoreboard tonight.”

In a game calling out for a hero, it was junior Logan Sinkfield who answered the call in his first playoff game as a Tiger with three touchdown catches.

“I knew from Monday that we could do this,” Sinkfield said. “Everybody was dialed in. All my teammates were focused. We made sure every single assignment was done in school. That’s how focused we are.”

Sinkfield is the ultimate “we, not me” guy on the Tigers roster. He did everything for the Tigers, including punting the ball tonight.

Troup has their first-year players back as well, especially after his third receiving touchdown proved to be the winning score. It was a sensational play that saw Sinkfield catch the ball near the line of scrimmage and make a whole host of Phoenix defenders miss on his way to a 40+ yard score.

“He’s hard nosed, and he’s super tough,” Glisson said. “He has been a great addition for us, and we are happy to have him. He does so many good things for us.”

How it got there:

The Tigers got rolling on the opening possession of the game as they marched it right down the field and took an 8-0 lead with 8:56 left in the first quarter when Tray Blackmon broke a run to the outside and scored from three-yards out.

The high octane aerial offense of the Phoenix was quick to respond.

“They have a really good offense, and that quarterback is really good,” Glisson said.

That offense led by Wofford commit Pauly Seeley quickly trimmed the Tiger lead to one in the first quarter.

Troup got right back to work and took a two-score lead when Taeo Todd punched the ball in from a couple of yards out for six and the Tigers added a two-point conversion for good measure. Once again, Seeley led the Phoenix down the field late in the second quarter to cut the Tiger lead to just two points. With momentum starting to swing, Sinkfield sprung to life. Todd threw a beautiful pass to the corner of the end zone as the clock ticked down to one minute left in the first half, Sinkfield fought off a defender and reeled in a touchdown catch despite the defender getting called for pass interference on the play. It was a critical play that gave the Tigers a 23-14 lead right before the end of the first half.

An interception in the end zone as time expired by CJ Sands preserved the lead heading into the break.

The third quarter proved to be the deciding 12 minutes. The Phoenix took the opening possession of the second half right down the field to once again cut the Tiger lead to two points.

“The one on the sideline when I made a few people miss was the best (of the three touchdowns),” Sinkfield said.

The fourth quarter was chock full of key plays, perhaps none as key as a fourth down illegal substitution on the Phoenix that gave the Tigers a fresh set of downs inside their own 15-yard line with 8:54. This allowed Troup to eat up some crucial minutes off the clock.

The Troup defense made a massive stop on fourth and two with 4:09 left in the game after the Phoenix had driven the ball deep into Tiger territory.

The Tigers milked the final minutes off the clock, including a big fourth and short conversion that ice the game.

“Last week we had a chance to win the game with a first down and didn’t do it, but we did it this week,” Glisson said.

After losing by a single score in the opening round of the AAAA playoffs last year, the Tigers were able to exorcize demons from a season ago.

Troup will host Cairo next Thursday at Callaway Stadium.