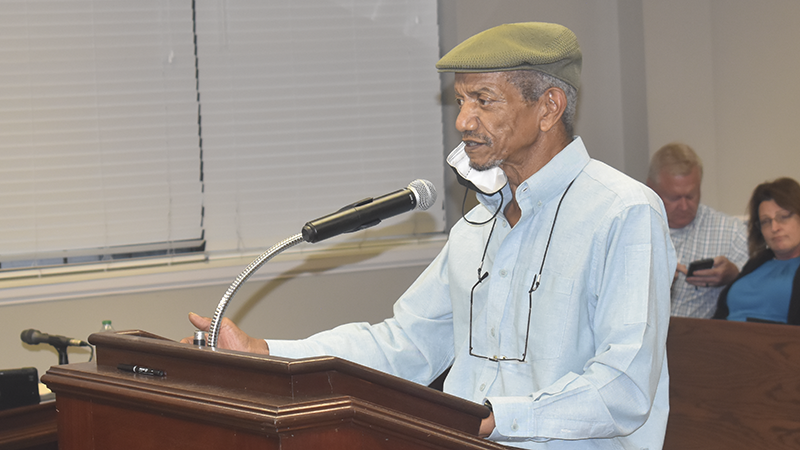 Kenneth Cox questioned the LaGrange City Council about the park that bears his father's name.

During the LaGrange City Council meeting Tuesday evening, members of the Cox family raised questions about the naming of the new park off of Hamilton Road, Colquitt and Brown Streets that they and others in District 2 believed was meant to replace the Frank Cox Union Street Park.

Kenneth Cox, son of Frank Cox, said when the city announced a new park location on McGregor St., his family asked that the city name the new park after his parents, Frank and Eleanor Cox. Kenneth said the family was happy with the new location because his parents had roots there.

Frank Cox was a former LaGrange City Councilman and a well-known member of the District 2 community, having operated several businesses and hosting a community radio program on WLAG.

Kenneth said during the previous council meeting they learned that the new park would be named Moss and Wood Park and not after his father. He said after the announcement, he began receiving phone calls from people in District 2 asking why the park wouldn’t carry his father’s name.

Mayor Jim Thornton explained that when the Hamilton Road project was originally conceived, it was thought that there would be a remnant of the Frank Cox Union Street Park and discussion was had about expanding that park.

Eventually, it was learned that the park would be fully eliminated by the road-widening project, but the original thought was that there would be a park on Hamilton Rd. and it would still be the Frank Cox Union Street Park, Thornton said.

Thornton said in the meantime, there was going to be a separate park project on McGregor Street. When that park was discussed, three names were proposed, Otis Moss, Benjamin Wood and Horace Ward, who were a doctor, a lawyer and a preacher in the community.

Moss and Wood was later chosen for the name of the park due to the nature of the names for a natural feel to the park, Thornton said.

At the same time, it became apparent there wasn’t going to be a remnant for the Frank Cox  Union Street Park because of the widening of Hamilton Rd., so it was decided to name the Linear Park after Frank Cox to keep his name on a park.

“I think everybody wants to honor your father and his memory,” Thornton said. “There are other opportunities for naming parks. It’s just that particular park has a longer existence.”