Playoff preview: LHS is in for a top-10 matchup against Burke County 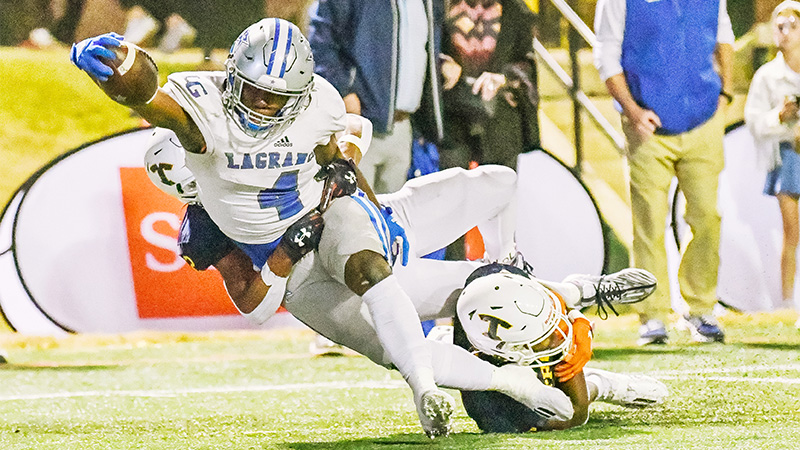 Saturday is usually reserved for college football, but this Saturday will see a primetime matchup of LaGrange and Burke County in the first round of the AAAA state playoffs. It will be a battle of top-10 opponents as both teams are ranked in AAAA.

“We are expecting a top-10 battle,” LaGrange coach Matt Napier said. “They are ranked in the top-10 for a reason. They play a really tough schedule and are in a tough region like us. We are battle tested too, and we are expecting it to be another war.”

Burke County comes into the game with the same record as LaGrange (8-2) but hsas to travel across the state due to a 17-16 overtime region loss to Wayne County late in the season. The Bears are used to playing in big games and were in the round of 16 of the AAA state playoffs a season ago. Burke County is back in the AAAA classification for the first time since 2019. The Bears have been perennial contenders under current coach Eric Parker, who led them to their only state championship back in 2011.

“They’ve been making deep runs in the playoffs and have competed for a championship since coach Parker has been there,” Napier said. “They have phenomenal athletes on both sides of the ball, and they are very well coached team.”

The Bears are a dangerous opponent, but the Grangers are equally as dangerous. The bruising duo of Jaylan Brown and AJ Tucker were on full display in last week’s win over rivals Troup. Brown — an adept passer — was asked to be more of a runner on Friday against the Tigers and answered the call with six carries for 108 yards and a touchdown while adding 84 yards and a touchdown through the air. Brown has thrown for 1,422 yards and run for 316 while scoring a combined 24 touchdowns to just one interception thrown.

It was Tucker who stuffed the stat sheet. He took 16 carries and turned them into 138 yards and two touchdowns — including the game-winning score late in the fourth quarter — despite having a long of just 23 yards as he was consistently able to chew out quality yards and keep the offense rolling and picking up first downs.

“Turnovers are big in games like this, and those guys keep the ball as safe as any,” Napier said. “Both of those guys have a strong understanding of our offense and how to take care of the football.”

Tucker is now the leading rusher for the Grangers on the season with 739 yards. A big game on Saturday or an extended playoff run could see Tucker eclipse 1,000 yards for the second straight season as a Granger.

Magic Johnson certainly played his part while catching a pivotal fourth quarter touchdown against Troup, He leads the team with 31 receptions for 610 yards and is tied for the team lead with six receiving touchdowns.

Defensively, it has been Parker Shattuck making waves this season. His crucial interception with the Grangers trailing late last Friday versus Troup might just be the play that Grangers fans will remember forever when they think back to the 2022 season.

“He has natural instincts for the game,” Napier said. “You combine that with the abilities that the good Lord blessed him with its a great combination. He’s a guy that has been playing since he was a freshman for a reason.”

He is not the only defensive standout. Sophomore Denoryian Reid has really flashed his potential this season as one of the main breakout players for the Grangers.

Saturday games are not normal for most high school football teams, so Saturday will be all about building a solid rhythm for an unusual gameday.

“We had to reorganize, and we started our plan for the week on Tuesday as opposed to Monday,” Napier said. “We got an extra day of film work on Monday, but it’s been a good week of practice.”

Saturday’s game is scheduled to kickoff at 6 p.m. on a chilly night at Callaway Stadium.

“You got to come each week with your best and not let off,” Napier said. “If you do let off, you could slip up and lose a game that you shouldn’t.”