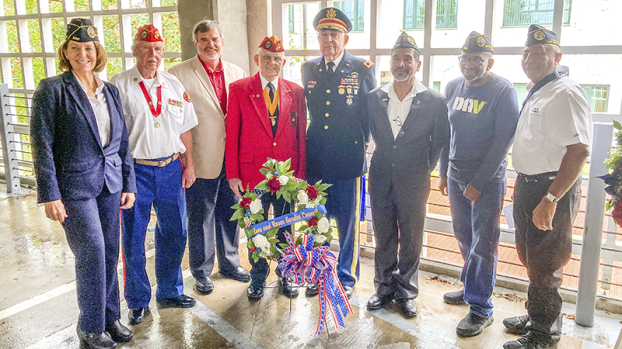 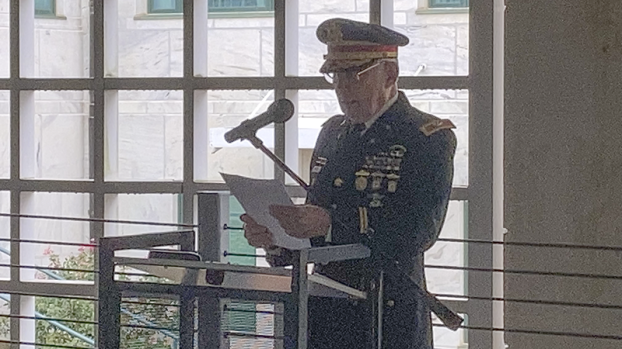 Retired Army Col. Bruce Meredith served as speaker for the annual Veterans Day Ceremony in LaGrange on Friday morning, asking for recognition for veterans, including those who served during less famous wars.

The West Georgia Veterans Council held the ceremony Friday morning to a muted crowd due to lingering rain from Tropical Storm Nicole. The event is normally held at Troup County Veterans Memorial, but it was moved into the nearby government center parking deck to stay dry.
The ceremony is held each year on Nov. 11 at 11 a.m. in recognition of the end of World War I.

Meredith, a LaGrange resident, served as the keynote speaker for the event.

Col. Meredith, 85, served as a Nuclear Missile Officer during the Cuban Missile Crisis in the Cold War and the Vietnam War Era. As an Airborne Ranger, Meredith served in Korea, Fort Carson, Fort MacArthur, Fort Bliss, Fort Benning, and at the Pentagon.

Meredith also has a distinguished career in competition shooting, serving as a member of the U. S. Army Marksmanship Unit, during which he became a Triple Distinguished Medal National Champion with 216 national rifle and pistol records.

Meredith competed in 40 nations, including in four Olympic Games: Seoul, Barcelona, Atlanta and Sydney, earning him a spot in the Army Marksmanship Shooting Hall of Fame.

During Meredith’s remarks, he asked for recognition for veterans of The Cold War, who are often forgotten.

“We honor veterans of the wars engraved on this big granite memorial back behind me where we usually have this thing, from the Revolutionary [War] to Afghanistan,” Meredith said.

“There is a war that is not on this wall, and I am hereby requesting that it be added — The Cold War.”

“You have seen the black and white POW/MIA flag, but do you know that there are 116 military missing in action in the Cold War?” asked Meredith, noting most of them went missing in Europe.

“I served as a Nuclear Missile Officer during the 1962 Cold War incident of the Cuban Missile Crisis. The United States had missiles set up at Homestead Air Force Base, Florida ready to shoot into Cuba.”

Fortunately, that never happened thanks to clearer heads on both sides, but it was later revealed that nuclear war was closer than anyone thought.

“In 2002, it was revealed that Russian Navy Officer Vasily Arkhipov, who was on a Russian Submarine off Cuba that was being pummeled with depth charges, made the decision to not launch a nuclear torpedo at the Aircraft Carrier, USS Randolph, preventing a possible WWIII,” Meredith said.

Arkhipov’s family was later awarded $50,000, and he was posthumously given a Future Life Hero of Progress Award for his humanitarian action, according to Meredith.

“Let’s hope there is an officer with good sense in Russia today who will defy any Vladimir Putin command to launch a nuclear weapon, which he is now threatening in Ukraine,” Meredith said.

Meredith also asked for more streets and parks for veterans.

“I might not know the person, but if I see a street name with a prefix of Lance Corporal, Staff Sergeant, Captain or Petty Officer, I know they were military who gave their lives,” he said.

Meredith said there are 17 names on the Vietnam Memorial Wall from LaGrange.

“Why aren’t some of those names honored?” Meredith asked. “I see new streets, avenues, bypasses and parks being created. Talk to our representatives. Get their attention and action.”