Senior spotlight: Dylan Stephens makes plays for the Cavs on both sides of the ball 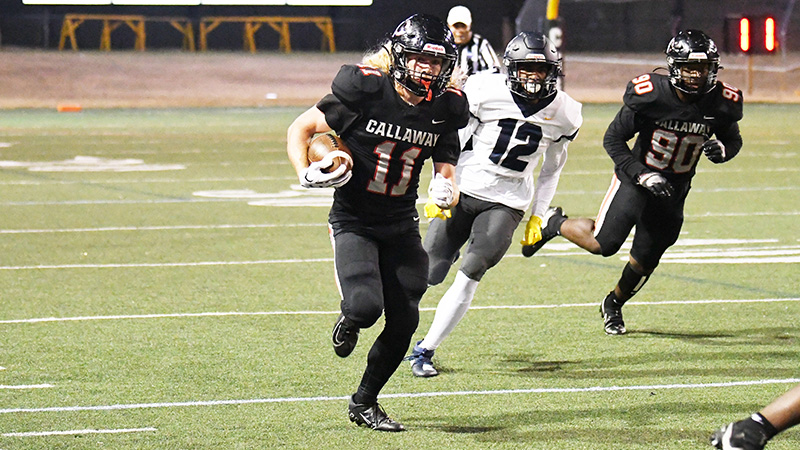 Senior Dylan Stephens is hard to miss on the football field. With his flowing blonde curly locks protruding from the bottom of his helmet, one might mistake him for a young Clay Mathews as he chases quarterbacks all over the field. He is hard to miss from the stands and even hard for opponents to miss as they have to account for Stephens on nearly every offensive play.

He is one of the premium outside pass rushers for the Callaway Cavaliers — a team chock full of quality defensive lineman.

“I switched to outside linebacker/defensive end during my 10th grade year,” Stephens said. “I would say it is probably my most natural position. It allows me to play what I see and keeps the game very simple.”

Stephens used to slot in as a middle linebacker.

He was raw when he first switched over to pass rusher but has made gains since his sophomore season.

“When I first started out, it was just see ball and hit ball,” Stephens said. “Coach (Jamal) Bruce worked with me on my technique, and I have gotten a lot better.”

Stephens has a relentless drive that pushes him even off the gridiron. He is a member of the Callaway track and field team and a former wrestler, but its his weight lifting ability that has been turning heads. He first got into weight lifting back in middle school and finally reached a major milestone in the offseason.

“One of my goals this season was to be able to power clean 315 lbs, and I was able to do that over the summer,” Stephens said.

He hit that mark during Callaway’s ironman competition over the summer in what proved to be a special moment. His goal now is to power clean 330-335 lbs by the end of the school year.

He is a man of lofty goals. After sitting out much of the 2020 Callaway state championship run with an injury, Stephens wants his chance to help lead the Cavaliers to glory.

“I want another ring,” Stephens said with a laugh. “I was injured during 2020, and it was tough not to be able to play in those games.”

Stephens sees the same key ingredients from that 2020 team in the current Callaway squad.  After a tough 0-3 start, the Cavaliers have taken their lumps and are now riding an eight game win streak heading into the second round of the state playoffs.

“I think it was good to get those losses out of our system early,” Stephens said. “We played a tough schedule to start the year. We kept our heads and kept working.”

While Stephens is primarily a defensive player, when he gets his chance to play on offense he shines. He was able to catch a touchdown pass earlier this season versus Redan before exploding for 91 yards on just six carries in a pivotal top-10 matchup against Eagle’s Landing earlier this season. Most of those yards came on a wide receiver reverse play that got Stephens out on the edge and into space.

“We actually started working on that play two weeks before the game,” Stephens said. “I was getting excited for us to use it during a game.”

While Callaway red and black run through his veins, he has not always been a Cavalier.

Callaway was not his first high school, but the Heard County transfer has long been a Cavalier and says that Callaway feels like home.

“I was born here and went to Callaway in elementary school,” Stephens said. “I really enjoy  the atmosphere here and was happy to come back to my home place.”