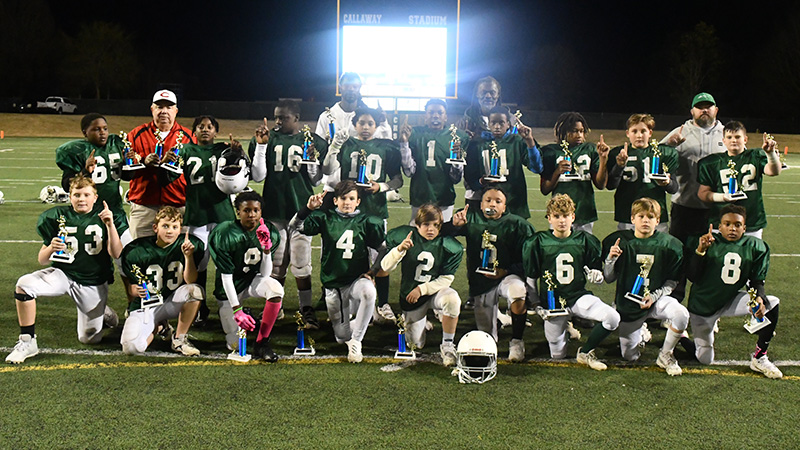 Despite the West Point Raiders mounting a furious late game comeback, it was the Hogansville Jets that came out on top 30-28 to win the 2022 Textile Bowl.

“We came out here and handled business like I thought they would,” coach Quantavius Leslie said.

Bear Napier broke the game open with an interception that went all the way back to the Raider 3-yard line and Dwight Hardaway did the rest to give the Jets a quick 6-0 lead with 2:40 left on the clock.

“[Napier] made a couple plays for us and none of them were more important than the interception,” Leslie said. “That was a game changer.”

It was a back-and-forth game and the Raiders answered on Andrew Rudd and DeQuavion Towles 38-yard connection that brought the Raiders fans to life.

It was not to last as the Textile Bowl MVP Dewonyah Ellison answered with a long kickoff return for a touchdown to take a 16-8 lead.

Before the end of the half, Hardaway got his second rushing touchdown of the game to give the Jets a 24-8 lead heading into the break.

Towles got his second rushing touchdown on the other side of the halftime break to give the Raiders some life and cut the Jets lead to 10 points.

“I’m proud of the way they fought through,” Henry Hutchinson said. “Any other team would’ve given up. These guys came back. Two field goals, and we would’ve won. I can’t ask for anymore. The team we lost to was undefeated.”

Hardaway answered the bell once again with his third rushing touchdown of the game.

Towles was absolutely tremendous in the game and caught a 35-yard touchdown to cut the Jets lead to 30-20 with 3:44 left in the fourth quarter. The Raiders recovered the onside kick and promptly scored on a long touchdown catch to cut the lead down two, but the subsequent onside was recovered by the Jets who ran out the clock by kneeling the ball.

“Last year we won the Textile Bowl but didn’t go undefeated,” Leslie said. “This year we went undefeated, and it means a lot to the team. This was a good way to send them off to middle school next year.”

“I expect to have this team back, and we’ll have some talent coming up from the nine and ten level,” Hutchinson said.