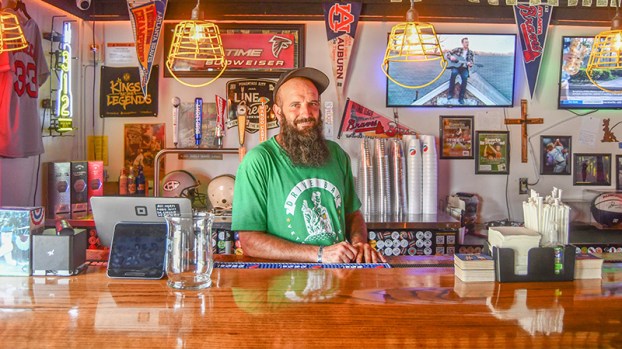 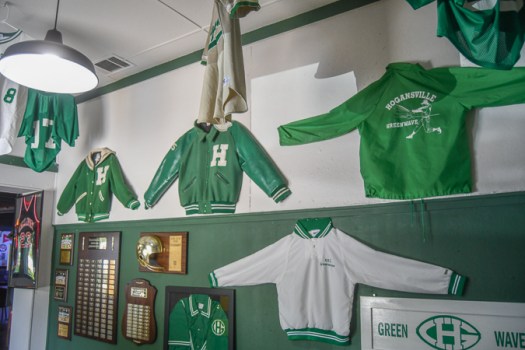 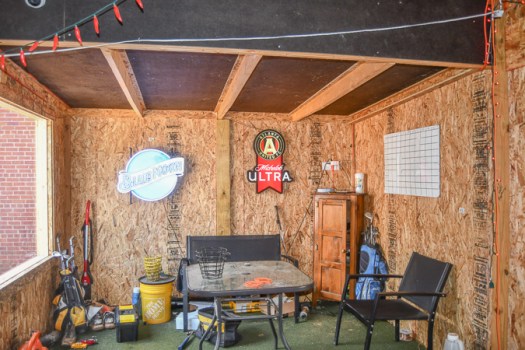 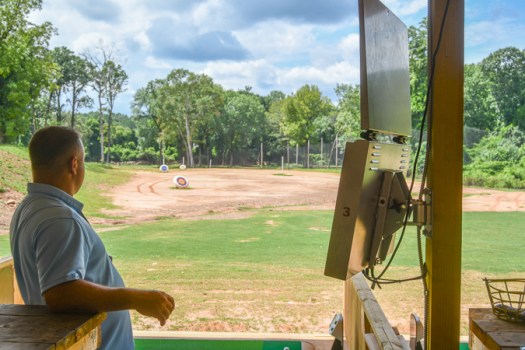 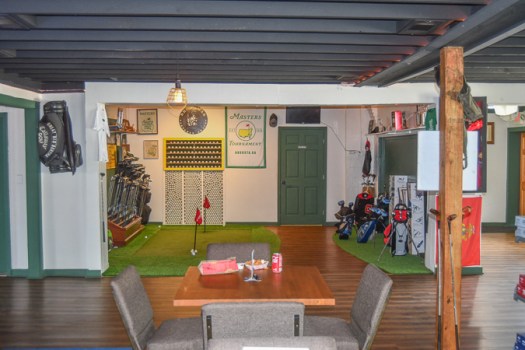 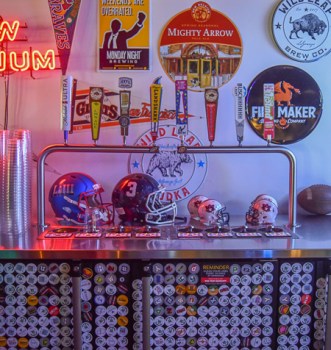 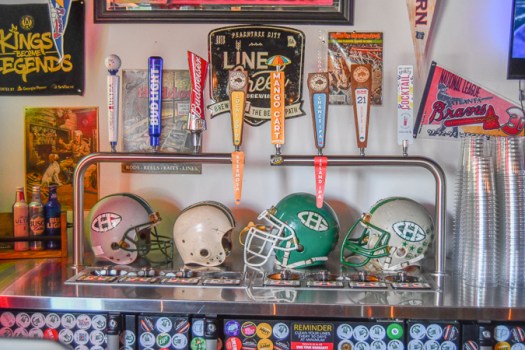 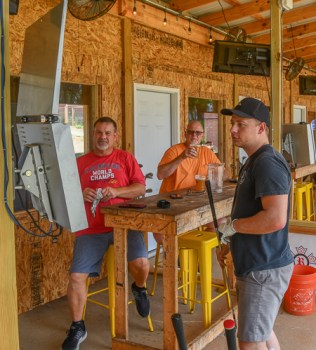 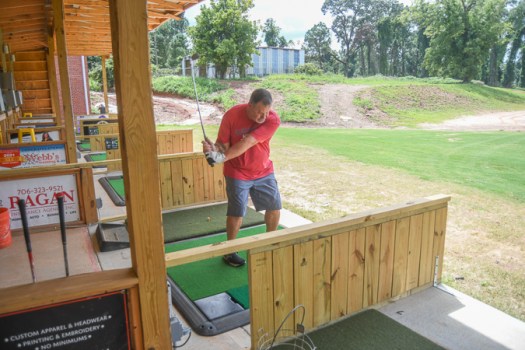 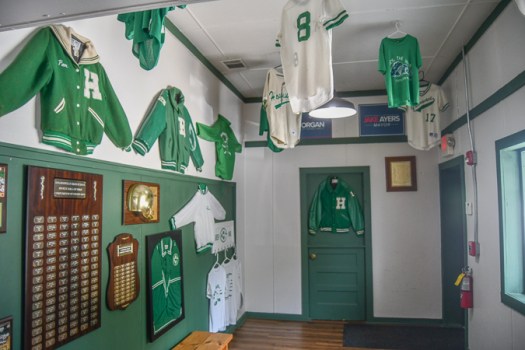 Editor’s note: This story originally published in an issue of the LaGrange Living magazine

Want to go for a drive? Don’t grab your keys and roll down some back roads, grab your 7-iron and head down to Drive Bar in Hogansville. The bar and driving range celebrated its one year anniversary in September and has continued to expand.

Customers include people from across Troup County, as well as adjacent counties, to have a drink and see how accurate they are with a golf club in their hand.

“There are a lot of people who come and don’t even play golf. It’s probably about 60-40,” Owner Brett Chapman said. “Weekdays it’s more of the people who want to play golf while on the weekend we get the people who have never swung a golf club in their life.”

When you first walk through the doors, you might mistake it for a Hogansville High School and middle school museum. The high school shut down in 1996 and precious little remains except memories from years gone by. Chapman, a Hogansville native and graduate of Callaway High School, wanted to preserve his town’s history. He has purchased, borrowed and gathered up a massive collection of sports equipment, plaques, banners and a host of other things from the old Hogansville schools and lined the walls from the entrance to the bar.

“I was in sixth grade when it closed, and I’m a real Hogansville nut,” Chapman said. “I have collected a lot of this stuff from people just coming in, and we’re just trying to make a little Hogansville museum in here.”

Despite the name, it is anything but a “dive bar.” Behind the slick surface of the bar sits the newest technology in beer pouring. Using magnets, it has a bottom pour method that gives you a “perfect pour” every time.

“There’s a magnet on the bottom of the cups and if you collect 10 magnets, you get a free beer,” Chapman said. “Once you select the size, it’s a predetermined amount that it will fill up to and when it hits that it will automatically stop.”

Plenty of customers come in and enjoy the bar as just that, a bar, but the main attraction is taking one of those perfectly poured beers out back to the driving range. Bring your own clubs or use the seemingly infinite amount of old clubs that Chapman has acquired to keep the business running smoothly.

“There are people who will come out and never hit a golf ball before, and they will be hitting the top of the building and breaking drivers like nobody’s business,” Chapman said.

The range has all the bells and whistles that you would find at any driving range of any sort.

“We got the Toptracer system, and it’s like the Top Golf camera based system,” Chapman said. “There are different games you play, and it can track the ball. We’re playing virtual gold right now, but there’s 10 or 12 different games people can play depending on skill level and interest.”

The business is also an official Callaway realtor. The shop is located inside the bar area and has Callaway clubs, golf balls, gloves, etc.

“I reached out to them because that’s the clubs I play with,” Chapman said. “I figured it would be pretty cool. At first, we just got the range balls from them and built it up from there.”

The idea comes from the simplest of places: Chapman likes to drink beer and play golf.

“I thought if I could get paid to do both it would be a win-win,” Chapman said with a laugh.

While the idea originated from the simpliest of premises, the undertaking to make it a reality was anything but simple. The idea really took root in his mind and began to grow three years ago. He started on construction late in March of 2022. He turned a building that had very little purpose, remodeled it and built the entire structure that is used to house the golfing area. Most of the work was completed by Chapman and his father.

His passion for beer has been around for more than a few years, but his deep infatuation with the sport of golf is something that came to him after getting out of the military in 2012.

“I didn’t get into gold until after I got out of the military,” Chapman said. “I got bored, and I was looking for something to do.”

Drive Bar proudly displays the fact that it is veteran owned. Chapman was a jarhead and was a bit directionless after leaving the marine corps. He tried his hand at a few different occupations like working in insurance, construction and real estate among others.

“The opportunity finally came for me to do it when I was working real estate,” Chapman said. “I had been wanting to do it for a while, and we took a chance on it last year.”

The “we” is Chapman and his wife, Jessica, who did not attack the project with nearly the optimism that Chapman did.

“My wife was scared to death,” Chapman said. “I’m a risk taker and try to do different things, She’s more of a planner. She went for it, and now she quit her job and works here full-time too.”

Chapman on the other hand, approached the drive bar with relentless optimism.

“I’m too stupid to be scared,” Chapman said. “I just felt like it was a case of ‘If you build it, they will come.’ People are looking for something to do around here and not everybody wants to drive to Atlanta. It’s something a little more close to home and localized with the same type of technology.”

The Drive Bar is far from a finished product. There are always new additions that Chapman is looking to add on to.

“We’ve been thinking about doing some clearing and expanding the range a bit,” Chapman said. “We are thinking about adding some turf. We still have quite a few projects still on the list to do.“

One of the big projects he plans on undertaking is putting in seating down in the driving area facility.

The Drive Bar can be located at 218 N. US Highway 29 in Hogansville. It is open from Tuesday-Sunday. Tuesday-Thursday sees the bar close at 8 pm. They stay open until 11 p.m on Friday and Saturday. Sunday’s hours are from 1-8 p.m.

Most days you can pop in and find Chapman standing behind the bar ready to serve you a beer. After a whirlwind journey, that space behind the bar feels like home.