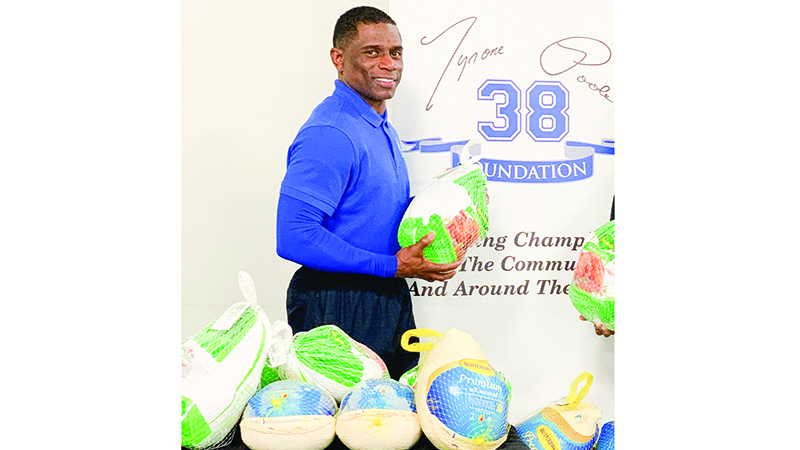 With the season of giving upon us, Tyrone Poole is once again stepping up to provide Thanksgiving turkey dinners in LaGrange. The two-time Super Bowl champ will give away turkeys and traditional sides for those in need on Sunday, Nov. 20.

Poole is giving away the turkeys through his foundation, Tyrone Poole 38 Foundation, at the former Cannon Street Elementary from 5:30 to 6:30 p.m. on Sunday.

Poole plans to give away 50 uncooked turkeys along with canned and pantry goods for side dishes for a full Thanksgiving dinner. The meals will be given away first come, first served, so arrive early to avoid missing out.

The former LaGrange Granger turned NFL champion said he helps provide the Thanksgiving dinners each year to give back to the community where he grew up.

After leaving LaGrange High School, Poole played football for Fort Valley State University and was taken in the first round of the NFL Draft in 1995 by the Carolina Panthers. During his 13-year NFL career, Poole played for the Indianapolis Colts, Denver Broncos, New England Patriots, Oakland Raiders, Houston Texans and Tennessee Titans, winning two Super Bowls with New England in 2004 and 2005. Poole retired from the NFL in 2008.

“I just try to give back to my hometown,” Poole said, noting the turkeys aren’t just coming from him but also his nonprofit foundation. The foundation provides similar giveaways throughout the year, he said.

Poole said he helps those in need because he has been blessed to be able to do so.

“I am blessed. God blessed me to be a blessing,” he said.

Poole reiterated that it isn’t just him helping others, saying he encourages those he has met throughout his career to also help.

“It takes a village, and it truly does take a village to create something great,” Poole said, noting that even his former teammate Tom Brady didn’t win his championships on his own.

The turkeys will be given away at the former Cannon Street Elementary School, which Poole once attended.

The school is no longer used by the Troup County School System, but Poole uses the location for the giveaway because of his connection to the school.