Athlete of the week: AJ Tucker ran through the Troup defense 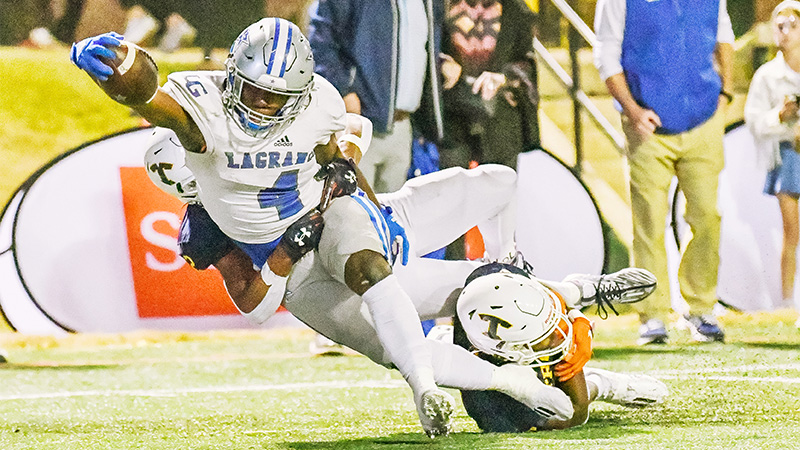 Athlete of the week AJ Tucker produced an iconic performance in an unforgettable Troup-LaGrange matchup. The LaGrange senior turned 16 carries into 138 yards and two touchdowns.

“I took that game very personally,” Tucker said. “[Troup] was my old team, and we lost to them last year, so I felt like I had something to prove. I left it all on the field.”

None of those runs were as important as the 14-yard run he took into the end zone with 2:41 left in the game that proved to be the game-winning score.

“It was very cool to get the game-winning touchdown,” Tucker said. “By now, I’m used to playing in those very big games.”

Tucker is a player that left it all on the field during his time at LaGrange. Despite battling through injuries at the beginning of the season, Tucker finished his senior season as the Grangers leading rusher with 792 yards. He averaged over 8.5 yards per carry and added nine touchdowns to his ledger in 2022.

It was not always an easy journey this season for Tucker and the Grangers, and the conclusion was anything but storybook after they lost to Burke County 23-20 in the first round of the AAAA playoffs.

“Even though stuff didn’t go according to plan, but God always has a bigger picture,” Tucker said.

Tucker feels like he has been underestimated over the years because of his perceived lack of size, but he makes up for it in energy, effort and of course, heart.

“I’m not your average running back — 6’1 and big,” Tucker said. “I’m kind of undersized, but I run big. I have a hard-nosed, tough running style.”

Tucker split reps at linebacker this season as well. He says that he’s willing to do whatever it takes to get the win and play wherever he is needed. This type of mentality could help Tucker get an opportunity to play at the next level — something he has desired since he started playing football when he was just nine years old. He has received interest from the University of West Georgia but is still playing the recruiting process by ear.

Tucker was the veteran of the Granger running back room in 2022. He stepped up as a leader and helped give advice to the younger guys.

“I told the younger guys that whatever they put their mind to they can do it,” Tucker said. “You only have to tell them once because they will pick up on it. They weren’t used to having bad games, so sometimes I just had to pick them up.”

Despite his time on the gridiron with LaGrange High coming to an end last week, he will be a Granger for life.

“Being a Granger is the true meaning of family,” Tucker said.