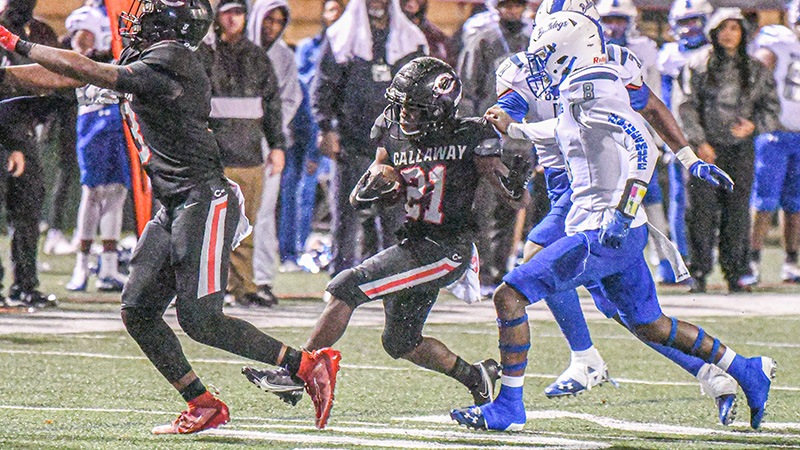 Under the Friday night lights at Callaway Stadium, the Callaway Cavaliers tend to shine bright. This Friday will be a massive matchup between the Cavaliers and Fannin County — the first time these programs will lock horns in their respective histories.

“Coach (Chad) Cheatham does a great job preparing his team,” Callaway coach Pete Wiggins said. “You can look at the past several years where they won 11 games last year and 10 games the year before.”

Fannin County went on the road and beat Athens Academy 28-13 in the opening round of the playoffs last week. The Rebels exited the playoffs in the second round a season ago and made the quarterfinals back in 2020, which was their first year playing in the AA classification under Cheatham. It has been the best stretch in program history for the Rebels as they have made the playoffs five straight years.

“Their quarterback is a very dynamic player, and he’s got great speed,” Wiggins said. “They play very hard, and I think it’s going to be a tough matchup on Friday night.”

Callaway, on the other hand, is a powerhouse in AA. The Cavaliers have made at least the semifinals in the last four seasons and have seven straight seasons of 10 or more wins.

Friday’s contest will be no pushover for the Cavaliers as the margins get thinner and thinner the deeper in the playoffs the Cavaliers go and with only 16 teams remaining in AA, Callaway is among the elites once again.

“Each week the talent gets closer,” Wiggins said. “There are only 16 teams left now here in the second round so the teams are well coached and most of the teams still alive have tradition and have been in big games before. All of those things make the margins for error smaller and smaller. We have to minimize mistakes and make sure we don’t have costly penalties and  mistakes.”

The Cavaliers had an interception returned for a touchdown on the first possession of the game last week versus Washington and can ill afford for that to happen going forward.

What they did like to see was a bunch of young guys stepping up in the backfield last week with the absence of top two running backs Qua Whitfield and Jordan King. Zai Hart, Teus Brooks and Tyren Buggs all saw their workload increase under the pressure of the playoff atmosphere and all three answered the bell against Washington.

“When there’s an opportunity to get on the field and make plays, we’ve had a lot of guys take that opportunity and run with it,” Wiggins said.

The Cavaliers have a chance to see the return of one or both of their missing running backs this week against Fannin County.
“I hope we do, I don’t want to comment too much on that, but I hope we do,” Wiggins said.

The lights will be on as the crisp fall air overtakes Callaway Stadium on Friday night. The game is set to kickoff at 7:30 p.m.