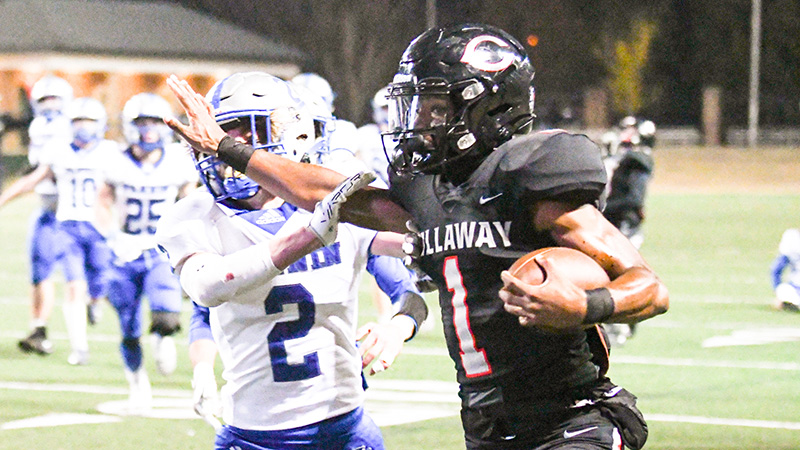 It was business as usual for the Callaway Cavaliers on Friday as they marched past Fannin County 20-13 and into their seventh straight quarterfinals — a remarkable sign of sustained success.

“There have been so many special players that have bought into what we do,” Callaway coach Pete Wiggins said. “Our community buys into what we do, and we have a work ethic and a will to win. We have guys that want to go out and be successful, and our coaching staff is really solid.”

It was a game that the Cavaliers had to dig deep and pull out despite not trailing the entire game. It was neck-and-neck until DeShun Coleman pulled out the game-winning score with 3:45 left in the third quarter. With the game tied at 13, Coleman produced a 37-yard touchdown run that sent the Cavaliers into the next round.

“I saw nothing but green grass,” Coleman said. “I saw one guy I had to get by and got past him. I could feel one coming up behind me, but I knew I could get past him and into the end zone.”

Up until that point, the game was deadlocked. The first quarter was scoreless, but the Cavaliers were able to end the scoring drought when Coleman connected with Sam Williams for a 12-yard touchdown connection with 11:21 left to go in the first half. Fannin County quickly answered on a long drive to tie the game at seven. The Rebels had to convert multiple third and longs to keep the drive moving.

The Cavaliers were able to find some momentum right before half. After a sustained drive, Callaway punched the ball into the end zone on a short touchdown run by Qua Whitfield with 1:18 left to go in the first half. After missing last week, the Cavaliers leading rusher was back this week and though he was far from 100%, still kept the offense chugging along.

“He’s been injured so for him to come back and have another big game for us is huge,” Wiggins said. “He would be the first one to tell you that the guys up front did a hell of a job.”

The Cavaliers took the 13-7 lead into the break and received the ball when they came out on the other side. On the first play of scrimmage in the second half, the ball sailed over Coleman’s head, which resulted in him having to dive on the ball and lose a big chunk of yards. The Cavaliers ended up going three and out and the Rebels took over at Callaway’s 41-yard line.

It did not take the Rebels long to tie the game with 7:51 left to go in the third quarter.

A few minutes later, Coleman made the play of the game.

“He has confidence in what we do,” Wiggins said. “He has continued to practice hard and grind all season long. He’s bought in and believes in what we do.”

The defense had to pull some big stops in the fourth quarter, none more important than when Korey Jackson broke up a pass on fourth down with under 20 seconds on the clock to give the ball back to Callaway near their own 30-yard line to seal the game.

“I think coach (Dusty) Hubbard had a hell of a gameplan coming into this game,” Wiggins said. “Our defensive line did a great job of dominating the line of scrimmage and playing physical.”

The Cavaliers defense came up clutch, but the offense had a chance to ice the game and pick up a first down on fourth-and-2 but were unable to convert near the Rebel 20-yard line with a shade over two minutes left in the game.

The Cavaliers had to dig deep, but it was the type of football game you would expect from two hard nosed teams in the round of 16 of the state playoffs.

“Fannin County is a great football team, and it was a great game,” Wiggins said. “It’s what you work so many long hours for — a chance to play in this kind of atmosphere against a really good football team.”

The Cavaliers will be hosting Appling County next week in the AA state quarterfinals.

“This is a very big win, and it feels good to move onto the next round,” Coleman said. “It was a hard fought, close game. At one point I thought it might slip away, but I’m proud of our team’s fight.”