Cindy Watson, a local volunteer for the Salvation Army, has been ringing the bell for two decades 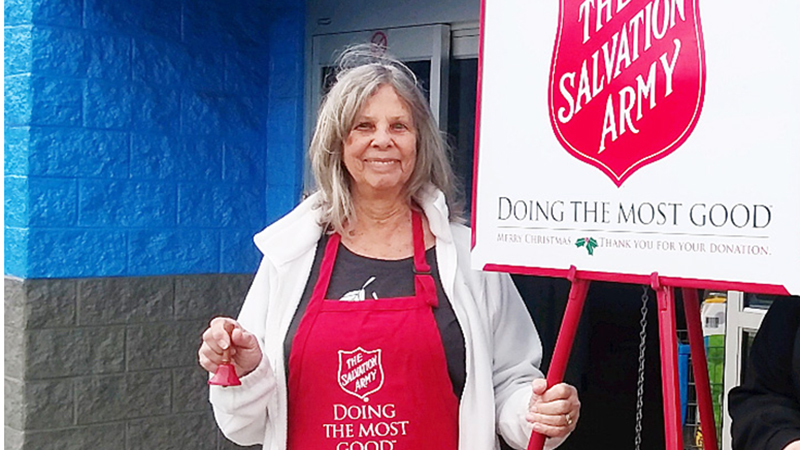 Whether it’s the lights, the classic holiday commercials or TV specials, there are always a few sure-fire signs it is officially Christmastime. One of the signs of Christmas in LaGrange is the ringing of the Salvation Army bells outside of stores in November and December.

Cindy Watson, a local, 20-year bell ringer for Salvation Army, said growing up in Miami in the 1940s the Salvation Army was everywhere during Christmas.

“There is a picture of me being held by a soldier, which is what the bell ringers were called back then. The soldiers would be on the street, playing their brass instruments and singing with the kettle, and that imprinted on me,” Watson said. “I know the history of the Salvation Army. I know the good they do. So, when the opportunity presented itself, I started volunteering.”

Watson said even before she retired she had always done volunteer work for the organization. However, ringing the bell is her favorite.

“It’s so much fun. People talk to you, tell you stories, and I know where the money goes.” Watson said. “If there’s a charity that anyone wants to contribute to, the Salvation Army is the one to do it. Their money really does stay in the community, and it does so much good for the people that live in the area.”

During her time as a volunteer for the Salvation Army, Watson said the most rewarding part of the job is seeing how the organization has helped people as well as seeing children learning how to give back to the community.

Watson said when someone shows their children the kettle and explains its purpose, it’s rewarding because children are learning at an early age to give back to their community.

“Several years ago, my friend Kathy and I were ringing the bell when this gentleman and his little boy came up. The dad went to put money in the kettle when the little boy put his hand up, he said, ‘No dad, I got it’ and took money from his pocket and put it in the kettle,” Watson said. “That was amazing. It brought us to tears that he was already learning to help other people in need.”

This year the Salvation Army bells will be located at both Walmart locations, Kroger, Belk and Hobby Lobby.

The Salvation Army of LaGrange is looking for volunteer bell ringers through Dec. 20, from 9 a.m. until 5 p.m. Monday-Saturday. Every dollar collected in the red kettles supports the wide range of services and programs provided throughout the year in LaGrange, including feeding the hungry, sheltering the homeless, offering emergency financial assistance, youth programs, and disaster response.