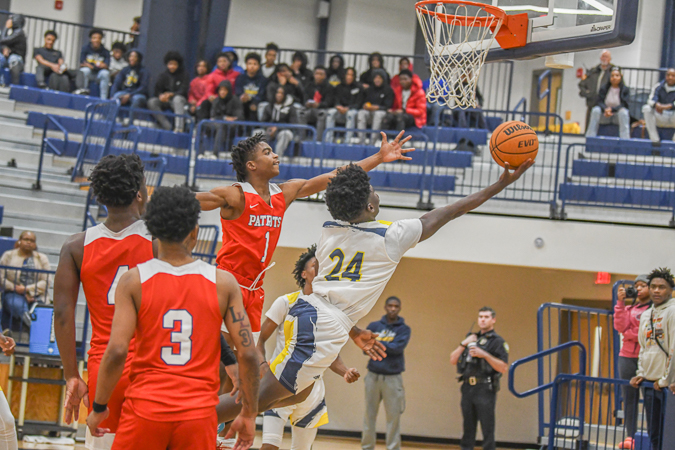 The atmosphere in the Troup gymnasium was tactile as the Tigers kicked off their 2022 season against Greenville. The boys team took a narrow 47-42 loss, but there was a lot to be learned for a young team under a first year head coach.

“It is what I expected even though we had a good fall,” Troup coach Jairo Gay said. “At the end of the day, I knew we had a very young team and a lot of new guys coming up from the middle school level.”

The Tigers will take some time to work out chemistry and fully gel together, but regardless of the outcome, it was a special night for Gay and Troup. With Gay at the helm and experiencing his first high school head coaching action, there is excitement brewing around the boys basketball team at Troup.

“It feels great to be a Troup Tiger,” Gay said. “I’m still confident in our guys and our program and the work we are doing. I think it’s going to be a successful season.”

The game was a defensive slugfest with neither team able to get much of a scoring advantage in the game. The Patriots were able to take a slight two point lead into the second quarter and were able to stretch it to just four points heading into the break.

After scoring 14 points in the first quarter, the Tigers offense stalled a bit over the second and third quarter, scoring a combined 15 points.

The offense sprung to life in the fourth quarter and the Tigers were able to recapture the lead for the first time since the first quarter with 4:55 left to go in the fourth. Troup was able to stretch the lead out to four.

“They have shown me that never quit attitude all summer,” Gay said. “Basketball is what they do. I know we had the fight in us and that is half the battle. The other half is learning to play at this pace of the game. Not only did we fight back, but the shot clock wasn’t a factor.”

This is the first season of the mandatory shot clock under the GHSA rules. Gay’s team played with energy and tempo, rarely slowing down to the point where the shot clock would affect their play.

Deo’Vion “Bop” Tucker led the Tigers with 11 points. Desmon Cunningham offered a presence on the block for the Tigers and was second on the team with 10 points.

Troup falls to 0-1 to start the season. The Tigers will be back on the court Saturday when they travel to Alabama to take on Valley High School.