Troup dominates second half against Cairo, wins to go to first quarterfinals since 2018 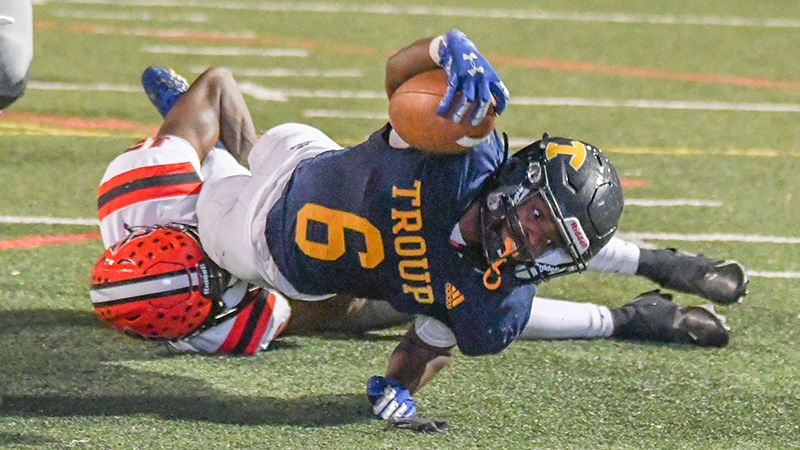 Back amongst the elites.

For the first time since 2018, the Troup Tigers will be in the quarterfinals of the AAAA state playoffs. Troup dominated the second half to come back and beat Cairo 26-17.

“We brought some guts,” Troup coach Tanner Glisson said. “Taeo (Todd) was not 100%. We had several guys that were beat up, and it was about toughness and guts. It wasn’t the best, but it was playoff football.”

It was a game that had just about everything. Deep touchdown passes, multiple safeties, quarterbacks throwing to quarterbacks for touchdowns, it was a classic playoff matchup on a Saturday evening in Callaway Stadium.

Troup jumped out to an early lead when they won the coin toss, elected to receiver, and marched right down the field for a touchdown when Todd rumbled in from 13-yards out.

The Syrupmakers chipped into the lead when they blocked a punt for a safety with 6:52 left to go in the first quarter. Cairo put another safety on the board with 7:08 left in the second quarter to make it 6-4 in what must be one of the most bizarre score lines ever at Callaway Stadium. The Syrupmakers scored quickly after receiving the punt from the safety to take their first lead of the game. A 56-yard touchdown pass made it 10-6 Syrupmakers.

Tray Blackmon nearly took the ensuing kickoff back for a touchdown but was caught at the 16-yard line. Todd hit Qua Moss a few plays later to give the Tigers their lead back.

It was not to last as the Syrupmakers a 70-yard bomb 17 seconds later.

Cairo was looking to add some points with under a minute to go in the first half, but a Qua Birdsong sack on second down near midfield killed the drive off. It was not the only big sack of the game with Tyler Leslie getting one in the first quarter on third down to stall out a Cairo drive.

The Tigers trailed 17-13 coming out of the break, but the second half was completely controlled by the Tigers defense.

“I loved it,” Glisson said. “I thought coach (Mike) Healy and those guys made some really good adjustments. I’m really proud of them, and they were due for that, and hopefully it gives them a lot of momentum.”

The Tigers forced a punt on the first Cairo drive of the second half and promptly took the ball down the field to score and take the lead. Logan Sinkfield caught a ball short of the goal line and broke a couple of tackles to get into the end zone for his fourth receiving touchdown of the postseason.

“We went through the whole week with him practicing at quarterback, because of Taeo (Todd),” Glisson said. “He is willing to do whatever, whenever. We are very lucky he’s with us.”

The Tigers took a 20-17 lead with 7:51 left in the third quarter. The lead was never in any real danger as the Tiger defense suffocated the life out of the Syrupmakers.

Todd delivered the dagger when he scampered across the goal line with 2:44 left in the fourth quarter.

Troup will head to Atlanta next Friday to take on Holy Innocence in the quarterfinals.

“It’s nice,” Glisson said. “We’re 11-1, and we are very happy with that and now we’ll prepare to go to Holy Innocence next Friday.”