Playoff preview: Playing on Black Friday is the standard for Callaway 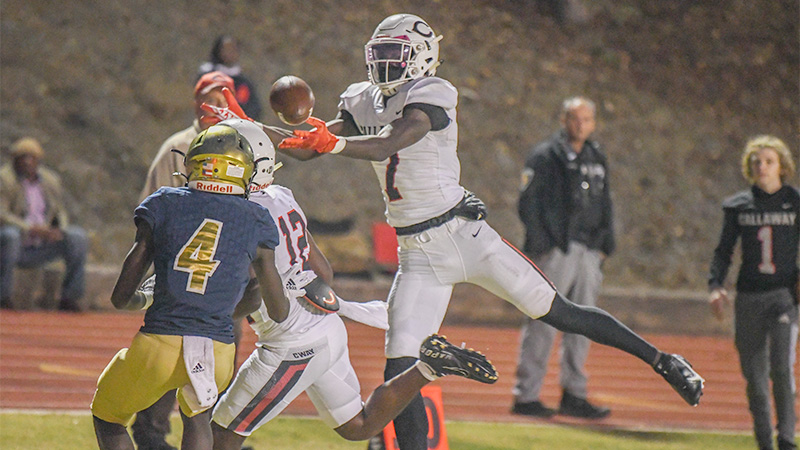 Callaway is back in the quarterfinals of the state playoffs for the seventh straight season — a remarkable achievement as coach Pete Wiggins and his team have gotten used to playing over the Thanksgiving holidays.

This is the standard at Callaway High.

The Cavaliers are coming off a hard fought 20-13 win over Fannin County in the second round of the state playoffs. After winning their first game of the postseason with their offense, the game against the Rebels was won largely because of their defense.

“Our offensive and defensive lines played really solid throughout the night,” Wiggins said. “We established the line of scrimmage and showed our physicality down in the trenches.”

The offense did enough to get the win as well. Star running back Qua Whitfield returned after missing the opening game of the playoffs against Washington. While he was not 100%, his return helped spark the Cavaliers offense. He finished the game as the leading rusher in the game with 89 yards and a touchdown.

The offense was led by junior quarterback DeShun Coleman. When the run game stalled, Coleman was able to consistently generate quality offense for the Cavaliers.

“DeShun gets better each week,” Wiggins said. “He never gets too high or too low, he stays even. He continues to do a great job leading our football team. He had a big run that scored a touchdown in a big spot for us.”

He finished the game completing 8-for-9 passes for 82 yards and a touchdown while adding 34 rushing yards and a rushing touchdown — which proved to be the game winning score.

Appling County is coming off a similarly hard fought second round playoff game against.

Exavious Reed was the Cavaliers leading receiver in the game once again with 32 yards. The Southern Miss commit finds ways to make plays on both sides of the ball.

Both teams are coming into the game riding nine game win streaks so something will have to give on Friday night. The Pirates came into the game at 10-1 and finished the regular season ranked no. 3 while the Cavaliers finished ranked no. 5.

“They are one of the best teams that we have seen this season,” Wiggins said. “They have great depth and have been in a lot of big games throughout the season, so we expect a big challenge on Friday night at Callaway Stadium.

The Pirates made the quarterfinals of the 2020 playoffs before making it all the way to the semifinals a season ago — both of these runs came in the AAA classification.

Callaway got a bit lucky with the coin flip that will allow the Cavaliers to host on Friday night. Wiggins expects the home faithful to have a monumental impact on the game.

“We need a big crowd there Friday night, and we need the support from the community,” Wiggins said. “We want to look up and see the stadium packed with red and black shirts. Having the fans there is really important to the kids and that can be a big momentum booster and home field advantage for us.”

It is a true battle of heavyweights on Friday night.

Neither team has suffered a loss since Sept. 2. Under the Friday night lights at Callaway Stadium, one top-five team will be going home while the other will be hosting a semifinals game next week with a spot in the AA state championship game on the line.