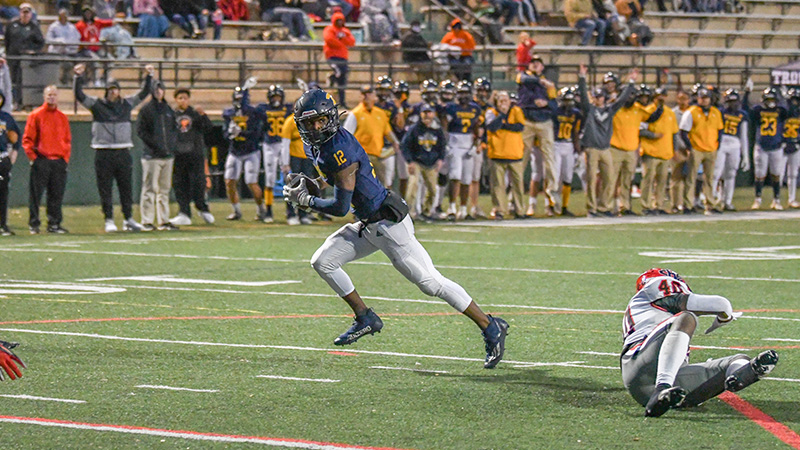 The Troup Tigers are back amongst the elite teams in AAAA football. With a 26-17 victory over the Cairo Syrupmakers, the Tigers booked a spot in the quarterfinals for the first time since 2018.

“There’s now 12 weeks of film on us, so we will have to battle,” Troup coach Tanner Glisson said. “There are only good coaches left in the playoffs. Those coaches have a good scheme, and we are going to have to make adjustments.”

The Tigers will have a date in Atlanta as they travel to Holy Innocents.

Back in 2018, the Tigers topped Cairo to make the semifinals and the Tigers are on the hunt for their first semifinal appearance since 2018 as well.

It is no longer 2018 and this Troup team is built differently than that team. This year’s team is littered with top class players that are only juniors.

He is not the only junior that has turned a big season into a critical playoff run. Logan Sinkfield was huge again for the Tigers against Cario and caught his fourth touchdown pass of the postseason.

Junior Qua Moss has also been special at the wide receiver position. After being kept relatively quiet by New Hampstead in the playoff opener, he was the leading receiver last time out with five catches for 58 yards and a touchdown.

The defense is also chock full of talented juniors. Moss, Sinkfield and Todd are key members of the secondary and are joined by explosive juniors Qua Birdsong and Noah Dixon. Birdsong is the Tigers leading tackler on the season and had a sack and two tackles for a loss against the Syrupmakers last time out.

“During the game, I didn’t realize how good our defense played until I went back and looked at the film,” Glisson said. “We allowed negative yards rushing.”

While Birdsong was immense last week, Dixon’s absence was notable as the defense blew a couple of coverages in the second quarter that allowed the Syrupmakers to score and two deep pass plays.

“They had those two big plays on back-to-back possessions,” Glisson said. “It felt worse than it was. That’s when you really miss Noah Dixon out there.”

There is a possibility that Dixon could return for this playoff run.

Holy Innocents comes into the game at 9-3 after trouncing Central Carrollton 24-14 in round two of the playoffs. The Golden Bears come into the game on a six game winning streak.

“They have a very big offensive line and defensive line,” Glisson said. “They are very disciplined, and they are a run first offense. They try to keep your offense off the field by controlling the ball and controlling the tempo of the game. They limit the number of possessions offenses get.”

This is the Golden Bears first season at AAAA after previously competing in the A private classification. Despite the jump up to a higher level of competition, the Golden Bears have adjusted nicely as they have a wealth of big game experience to call upon.  Under current coach Todd Winter, Holy Innocents made the quarterfinals last season and all the way to the semifinals 2019.

It has been said that good teams can win at home and great teams can win on the road. The Tigers will get a chance to prove how legit they are when they travel to Fulton County to take on the Golden Bears at 7:30 p.m on Black Friday.

“The playoffs are about toughness and mental toughness,” Glisson said. “You have to overcome adversity. Being on the road there is going to be some adversity. Thanksgiving week with no school means it’s hard to get a routine, but it’s a blessing to have this great opportunity. Pressure is privilege.”