Thornton given Flame of Excellence at final council meeting 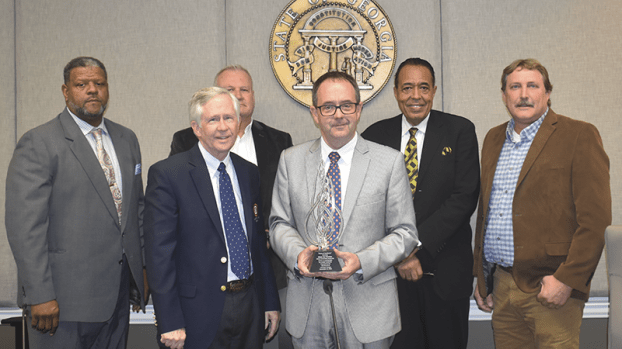 Mayor Jim Thorton was presented the Flame of Excellence Award at this final council meeting on Tuesday night. -- Photo by Tommy Murphy 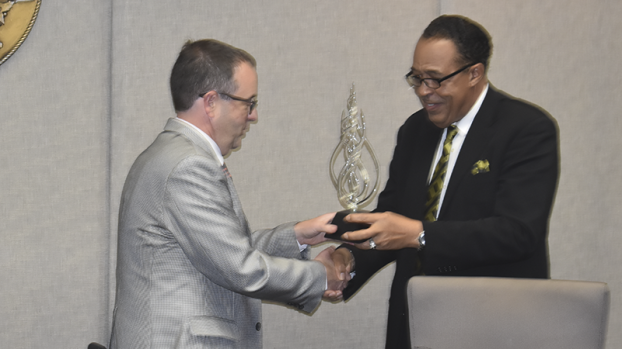 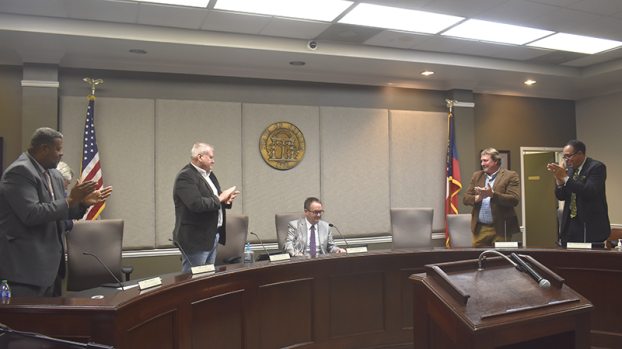 Thornton was given a standing ovation at the close of the final council meeting he presided over. -- Photo by Tommy Murphy

On Tuesday evening, Jim Thornton presided over his final council meeting as mayor of LaGrange.

Thornton said he plans to officially step down as mayor on Wednesday, leaving the city in the hands of Mayor Pro-tem Willie Edmondson and City Manager Meg Kelsey.

In what was an emotional day for the outgoing mayor, Thornton was recognized twice by the city he has helped govern for over a decade.

Edmondson first recognized the outgoing mayor by reading a proclamation proclaiming Nov. 22 as Jim Thornton Day in LaGrange during the morning work session. Later in the evening meeting, Edmondson presented Thornton with The Flame of Excellence.

The award has been given out in LaGrange since 2003 to exceptional individuals who bravely light the way for others, Edmondson said. Thornton is the seventh recipient of the award.

“We are very pleased tonight to show our gratitude and appreciation by adding another name to this list of exceptional leaders in our community: Mayor Jim Thornton,” Edmondson said.

“You have certainly been a great mayor, and I’m sorry to see you go,” Edmondson said. “You are a very smart man, a very honest man and a very fair man. I say that from my heart.”

Thornton served a single term on the LaGrange City Council before being elected mayor of LaGrange in 2014, where he has served for the last nine years.

Thornton announced that he was stepping down during his third term as mayor in early October to assume the role of Director of Governmental Relations for the Georgia Municipal Association (GMA) on Nov. 28. Thornton had previously served on and chaired multiple boards within GMA and most recently served as GMA President.

The new job is a full-time position, so Thornton will be taking a break from practicing law. His partner at Thornton & Graham, P.C., Heather Graham, will be taking over the firm.

In the new position, Thornton will lead the legislative advocacy team to represent the interests of GMA cities throughout Georgia

Although Thornton will be working in Atlanta, he said he and his wife, Corinne, are keeping their house in LaGrange and do not plan to move permanently. He said they will remain LaGrange residents and voters. He will temporarily rent a place in Atlanta through the transition.

As he ended his last city council meeting, Thornton said it’s been a very emotional day that has weighed heavy on him.

“LaGrange is my hometown. LaGrange is where I was born, raised, continue to live and plan to live,” Thornton said.

“I think when you are honored to serve as an elected official in your hometown, as all of you have, that’s quite a statement of support from the community. It’s not something that I have taken lightly. It has been the honor of my life, but I am excited about this new opportunity. I will truly miss all of you.”

Before banging the final gavel, Thornton was shown a video with countless leaders throughout the community saying goodbye and thanking him for his service to LaGrange.