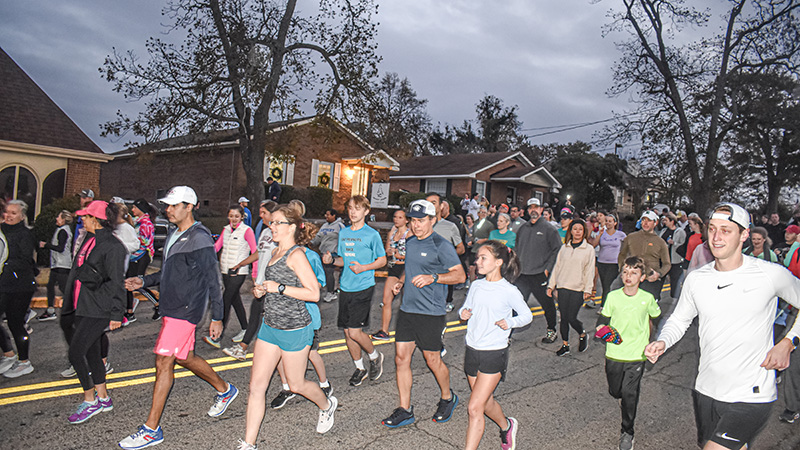 The 12th annual Turkey Trot was once again held on a cold Thanksgiving morning in LaGrange.

The annual fundraiser race is hosted by The Inner Path yoga and fitness studio and raises funds for different charities each year.  This year the race raised funds for Illuminate Justice, a LaGrange nonprofit that fights child sex trafficking and helps its victims.

The run was started by Inner Path owner Lisa Alford after she and a group of friends decided to run on their own in LaGrange when she wasn’t able to run in the annual Thanksgiving Day half marathon in Atlanta. The running group ended up with dozens participating, so it became an annual tradition.

Since then, the annual Turkey Trot has become a community event with t-shirts, a sought-after flamingo trophy and an opportunity to raise funds for a worthy cause.

Alford said the event continues because the community loves it, despite her lack of promotion for the run.

“People show up because they like to be around community and family. They also know it’s a worthy cause that things are going to,” Alford said, noting they request a donation to the chosen charity, but it’s an optional donation.

“I enjoy seeing the community come together,” Alford said. “Every time I stand up here every year, I look out at everybody and get choked up thinking about how one small thing becomes this huge thing.”

“The race is approximately five miles. It’s the same route we’ve had since year two, so we kind of know where everything is if you’ve done it a few times.” Alford said.

There’s also an option to divert during the run for a shorter two-mile route.

Alford said she paints over used political signs to mark the route each year.

The prize for the male winner and female winner each year is a lawn flamingo dressed as a turkey that winners sign and bring back each year to give to the next winner.

“It’s kind of a race, but it’s a fun race. You’re just getting the flamingo to keep for a year,” Alford said.

Alford said they don’t do a lot of planning for the race. The biggest part is probably the t-shirts and finding a cause to either give donations, she said.