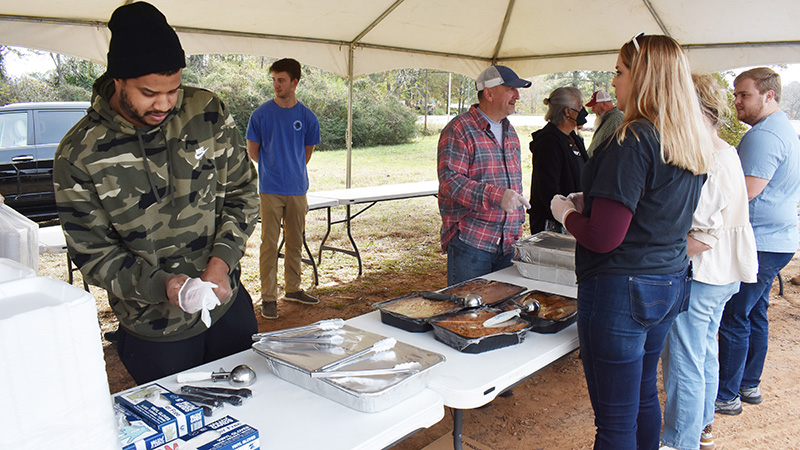 Nearly 450 local people had free Thanksgiving dinner on Thursday thanks to some hard work put in by volunteers in West Point and at two local churches. West Point city officials, downtown restaurants, Refuge Point Church and the Chattahoochee Fuller Center Project (CFCP) joined together to prepare 200 plates and to have them distributed throughout the local area before noon.

Jackson Heating & Air in LaGrange provided an open-air tent for the Thursday morning serving line where the plates were put together. Each plate had servings such as turkey and dressing, sweet potato souffle and cranberry sauce. Some people came by to pick up plates but most of them were delivered by volunteers.

Mayor Steve Tramell got things started with an opening prayer and the tent area quickly became a beehive of activity with plates being readied and taken out for delivery. High priority went to those who are homebound. Council Member Sandra Thornton made many of those deliveries.

Fifteen plates were taken to Lanett residents who are homebound and normally get a hot meal delivered by bus every Monday through Friday.

“Since it’s a holiday, there’s no such delivery today, but we want to make sure they get a Thanksgiving meal,” Thornton said. “Some of these people live alone and have no family. We want them to know we are thinking about them on a day like today.”

Across the river at Plant City Baptist Church, Pastor Randall Hamer and a greatly involved group of volunteers prepared 125 plates to be sent out throughout the local area. Courtney Sanders, who heads up the Thanksgiving Day program every year, said church members start to get ready for the big day before Halloween.

“More than half of the plates are delivered,” he said. “People come here to pick them up, too. We have a good group of cooks who prepare the food at home and bring it here.”

Each plate had turkey and dressing, potato salad, cranberry sauce, sweet potato shuffle, green beans, a roll and a slice of cake.

The Family Life Center at Fairview Baptist Church in Valley was a busy place on Thursday morning. A hardworking group of volunteers were preparing Thanksgiving dinner plates and helped deliver most of them to the community. It’s a long-time tradition to do this at Fairview, and it’s a year-round effort to take care of all the details needed for everything to come off smoothly on Thanksgiving morning. A total of 125 plates went out on Thursday, each one with turkey and dressing, cranberry sauce, a roll, green beans, sweet potato souffle, a slice of pound cake and bottled water.

The Rev. Carl Benedict is the pastor of Fairview Baptist Church.