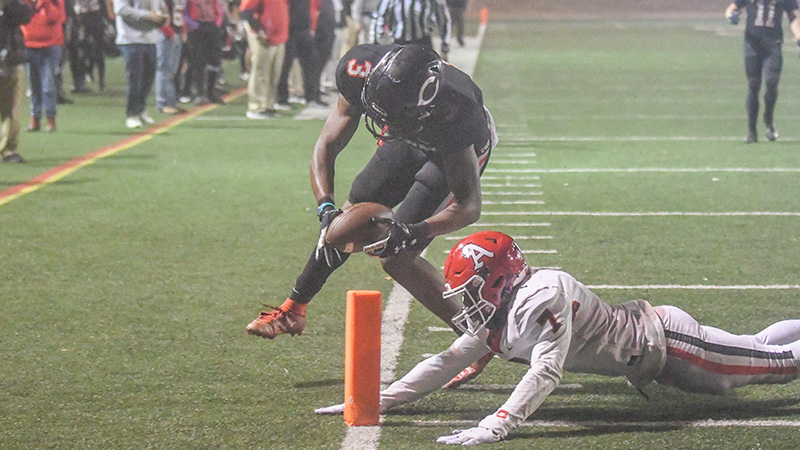 The Callaway Cavaliers saw their season come to an end on Friday night as the Appling County Pirates left Callaway Stadium with a 44-21 victory.

“I’m really proud  of our seniors,” Callaway coach Pete Wiggins said. “After we dropped a few games early, they never doubted or questioned anything we did. To get back in it and get to the elite eight is very special. I think it says a lot about the character of our football team and the leadership of our senior class.”

The final score was not indicative of how competitive the first half was as the Pirates outscored the Cavaliers in the second half 28-7. With the Pirates up by just two points, Jaylen Johnson returned a punt for a touchdown with 10:10 left in the third quarter to put Appling up two scores and suck the life out of Callaway Stadium.

“In big games, there are always four or five plays that switch momentum and that punt return in the third quarter really took momentum away from us and to their credit they made a play,” Wiggins said.

The first half was exactly what you would expect from two of the top teams in AA. The Cavaliers went toe-to-toe with neither team giving an inch. The Pirates took an early 7-0 lead on a beautiful throw and catch from Dayson Griffis to Camden Hickox, but the Cavaliers had a response when running back Qua Whitfield threw a touchdown pass to DeShun Coleman on a trick play that sparked the home crowd to life.

Johnson — who had a monster day for the Pirates — got his first touchdown of the game when he ran it in late in the first quarter. Once again it was Whitfield with the response as he plunged in from two yards out to give the Cavaliers a 14-13 lead — their first and only lead of the game.

The Pirates made a field goal toward the end of the first half to retake the lead and grab momentum heading into the break.

The second half was all Pirates after the punt return for a touchdown. Johnson scored his third touchdown of the evening with 4:14 left in the third quarter to put the Cavaliers in a big hole. Johnson added his fourth touchdown in the fourth quarter to put Callaway in an even bigger deficit.

The Cavaliers were able to get a late touchdown when Coleman connected with Treyonn Tucker on a nice throw and catch in the fourth quarter before the Pirates killed the game off with a garbage time touchdown.

“You can’t take games like this for granted,” Wiggins said. “The game is so special, and there are ups and downs and sometimes you have to battle adversity. It didn’t go the way we wanted, but I’m really proud of our guys.”

Despite the defeat, the Callaway football program remains strong. The Cavaliers made their seventh straight quarterfinals which simply put means they have been a top-10 team in AA for the better part of a decade.

“Our kids work hard, and they believe in what they do,” Wiggins said. “It’s a grind day in and day out. The coaching staff does a hell of a job. They come in every day, and they put the time in and they love these boys. There is a great determination in our team, in our players, our team and our staff. I think that is what contributed to consistent success.”