Thornton looks back on his years as mayor 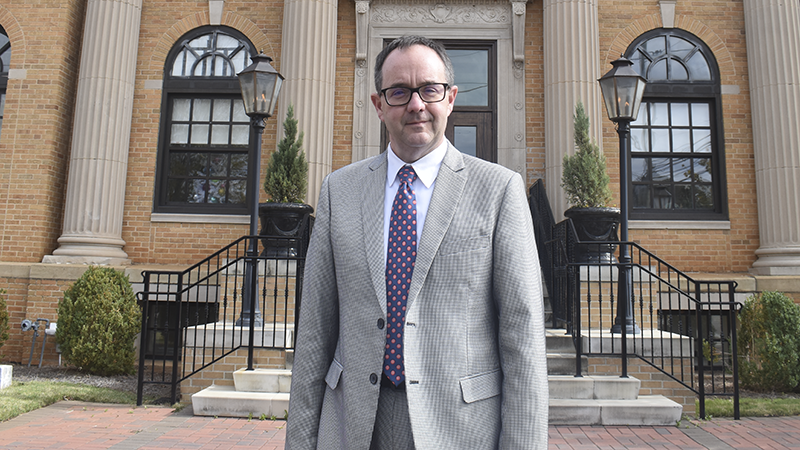 After helping LaGrange grow and thrive for more than a decade, Mayor Jim Thornton is now moving on to use his talents to help all cities in Georgia in his new position with the Georgia Municipal Association (GMA). During his final weeks in office, the outgoing mayor looked back at some of his accomplishments and struggles while in office.

“I think my biggest accomplishment as mayor has been continuing to grow, to see LaGrange grow, but diversify in that growth,” Thornton said.

During his time as mayor, Thornton worked not only to expand manufacturing in LaGrange  but also diversify the types of businesses.

“We’ve also started to see diversity in terms of geographic location. We’re seeing growth downtown but also by the mall and at Exit 13,” Thornton said.

The city was able to attract these businesses through its efforts to make LaGrange a place where people want to visit and live. City efforts like Sweetland Amphitheater and even The Thread have played a big part in LaGrange’s growth.

Thornton hasn’t just worked to expand the hospitality sector. Industry has also thrived under his watch.

The former mayor said he was involved with expansions of existing industries in LaGrange such as Duracell and Jindal Films, as well as the recruitment of Remington Arms.

Cities build out infrastructure, build out the public property and provide public amenities that attract people to move here, which then attracts businesses to build in LaGrange, Thornton said.

“Some people say, ‘why is the city, building more parks and not building a bowling alley?’ Well, cities across the country own and operate parks. They’ve been doing that for hundreds of years. I don’t know of any city that owns or operates a bowling alley. That’s not what cities do,” Thornton said.

“We’ve had three [bowling alleys] and they’ve all gone out of business,” he added.

Thornton said decades from now he will be the proudest of being an advocate for the City of LaGrange.

“It has been a tremendous honor for me to serve as mayor. The mayor does not run the daily operations of the city that are handled by the city manager. The mayor doesn’t create new laws, and I can’t make motions. I can’t even vote unless there’s a tie. But the mayor is the principal advocate for the city.” Thornton said.

“I am proud of the fact that I have been able to explain to people, some who agree with me, and some who may or may not agree with me, what a great place the City of LaGrange is and what a wonderful community it is,” Thornton said. “That has been something that I have really enjoyed doing, but what has been the honor has been for the people of LaGrange to entrust me in that role.”

Thornton said being mayor of LaGrange wasn’t always easy. He pointed out two difficult times during his time in office.

The time after the unexpected death of former city manager, Tom Hall, was difficult, Thornton said.

“He was a relatively young man, and no one saw that coming. After he passed away, we had to do a search and ended up hiring the assistant city manager, Meg Kelsey to be the permanent city manager. That was a very challenging time,” Thornton said, noting he had to be more involved in the daily operational decisions for the city than he had done before or has done since.

The other challenging time was during COVID.

“I’ve told people many times when I got elected mayor, there were probably a dozen crises that I might have anticipated a dozen things that could go wrong.”

He said the city could have had a big factory closure with record unemployment, a fire with casualties, a police shooting, a bridge collapsing or countless other potential disasters that could happen in LaGrange.

“I don’t think anybody expected a pandemic, to shut down the city. We didn’t anticipate that. We didn’t have a playbook for it. We were all operating completely in the dark. But so that was a very, very challenging time.”

“Even though we went through a brief period of time when some things were closed or masked required, that was a relatively short period of time in the grand scheme of things, and we immediately got back to business as usual.”

Thornton said he has most enjoyed getting around to the city, meeting people and discovering just how much energy and diversity and passion runs throughout the community.

“I won’t say I will miss presiding over rezoning public hearings. Those are very important things. but not necessarily the fun part of the job,” Thornton said. “That’s part of the job you have to do, and you have to do your best. There are 31,000 people in LaGrange and they all have a different opinion.”

Thornton said when he looks back at LaGrange decades from now he hopes people will be more engaged in the community and try not to just be critics.

Thornton said the one project he feels he is leaving on the table unfinished is the Hamilton Rd. widening project.

In 2015, Thornton invited the Georgia Department of Transportation (GDOT) board to LaGrange and showed them Hamilton Rd. and talked about the delay. At the time, they agreed to move forward on the project and have since purchased all of the rights-of-way.

“Everything costs more because of the inflation than they expected, so now they have slowed down the construction contract,” Thornton said. “I’m disappointed by that, but I’m told that it’s still going to happen.”

“I think it will happen within the next three years, but until it’s actually done you can’t predict what will happen.”

Thornton said he plans to continue advocating for LaGrange in his new job.

“I’ve taken a position as Director of Government Relations at GMA, and I will be working primarily in Atlanta. There will be lots of travel involved around the state because we represent and advocate for all of the 537 cities in Georgia.”

“It’s a full-time position, so I will not be practicing law. My law partner, Heather Graham, is going to take over the firm. She is going to stay here with the same staff and same location and same basic type of law.”

Thornton and his wife, Corinne, plan to remain residents of LaGrange.

“I’ll be working in Atlanta. We are still going to continue to keep our house here although I have rented a place in Atlanta temporarily to go through this transition. We don’t plan to move permanently. We plan to stay permanent residents of LaGrange.”

“I remind people who ask me about the special election in March that I’m still going to be a voter, so you know, be nice to me,” Thornton joked.