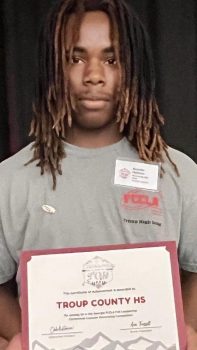 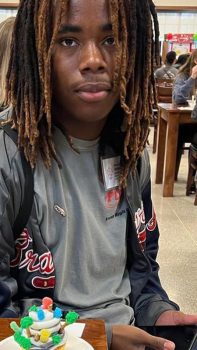 Ogletree said he was excited and nervous to compete with 40 other schools in the contest. The theme for the contest was Trekking to the Top.

“Once I won, I felt humbled because I know there were a lot of other people there who worked just as hard as I did,” Ogletree said. “I was also excited about it, but I didn’t want to make other people feel bad because I won.”

Ogletree said he is proud of the accomplishment and liked having the experience.

“It was something new that I did not only for myself but for my team,” Ogletree said. “I went to have fun and gain experience should I do it again next year, but I really liked being a part of a team.”

In being a part of a team, Ogletree said it felt good to have a group of people supporting and cheering you on.

On his way to achieving culinary success, Ogletree has shadowed in local restaurants like Venucci and said he wants to one day own a food truck.

“Shadowing at Venucci was a great opportunity,” Ogletree said. “I was able to ask them questions, like how they got started and learned a lot.”

Ogletree said he has always loved to cook and initially started cooking because of his grandmothers.

“Cooking is like one of my escapes from reality. When I cook, I put my everything into it, and it makes me really happy,” Ogletree said. “

From the love and care Ogletree saw his two grandmothers put into their cooking, he became inspired to own a food truck called The Gran Dinner 2.

“I always thought if I open my food truck it would have to resemble all the love my grandmothers put in their food,” Ogletree said.

According to the organization’s website, FCCLA was founded in 1945 as a way to help young men and women become leaders and address important personal, family, work, and societal issues through family and consumer science education. Involvement in FCCLA offers members an opportunity to expand their leadership potential and develop skills for life.