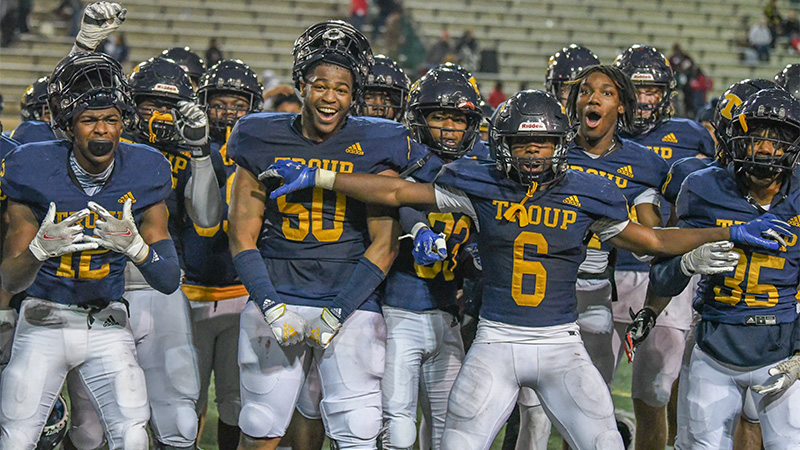 Troup is back on the road for the second straight week as they travel to take on Benedictine in just the third ever semifinal appearance for the Tigers — their first appearance since 2018 and their second under head coach Tanner Glisson.

“There have only been three of them in Troup history, and we’re lucky enough to be a part of two of them,” Glisson said. “Games like this don’t come around very often, and we appreciate the opportunity and how hard it is to get there.”

It is a true battle of heavyweights as all four remaining teams in AAAA finished the regular season ranked in the top 10.

The Tiger offense has been led by junior quarterback Taeo Todd all season long, and last week against Holy Innocents was no exception. Todd was exceptional in the quarterfinals, throwing for 274 yards and three touchdowns and rushed for 105 yards and two touchdowns. After being hobbled by an injury heading into the round of 16 game against Cairo, he has worked his way back to nearly full-fitness.

“He’s about as close to 100% as he can be at this point in the season,” Glisson said. “Coming back from his injury, he is in a much better spot than the last two games and that is very positive.”

He has not been alone. Juniors Qua Moss, Malikih Poythress and Logan Sinkfield give Todd a terrific trio at wide receiver. After a somewhat quiet start to the postseason, Poythress exploded for 105 yards and a touchdown last week with a long of 73 yards.

Sinkfield has been dynamite in the playoffs and caught his fifth touchdown of the postseason last week against Holy Innocents to go along with five catches and 95 yards. Moss led the team in receptions, receiving yards and receiving touchdowns in the regular season. He reeled in five passes for 69 yards and a touchdown last week as all three of the stud wide receivers chipped in with big performances.

The Tigers defense will be in for a tough task as they try to slow down a Benedictine offense led by quarterback Luke Kromenhoek, who is committed to Florida State.

“Their quarterback is going to Florida State, and they have a wide receiver (Za’Quan Bryan) that is going to Minnesota,” Glisson said. “They are surrounded by a bunch of good high school players and guys that will be going to college and playing other places.”

Special teams will likely play a major factor in the game as well. The Tigers, who were down to their third-string punter in recent weeks, saw the return of starter Chris Moore last week who handled all punting duties and will likely resume that role until the Troup season comes to an end.

“We were having to be creative in the punt game, and Benedictine has a tremendous punt return unit with multiple returns for a touchdowns this year, so we will have to be really solid in those areas,” Glisson said.

While the Tigers are hunting for their first championship game appearance in program history, the Cadets have been there and done that. The Cadets have three state titles in program history with the first coming in 2014 and the latest coming last season when they beat Carver (Columbus) 35-28. All three state titles have come under current head coach Danny Britt. Before taking over in 2011, the Cadets had only been as far as the semifinals, once in 1957 and once in 1978. Now, they are a powerhouse regardless of what classification they play in as they have captured a state title in AA and AAAA.

The Cadets come into the game riding a nine game win streak after they dropped two of their opening four games of the season, which is exactly what happened last year as they started the season 0-2 before winning 13 straight and claiming their third state title in eight years.

“We have to go to their place, and they know what it takes to win a championship,” Glisson said. “It is going to be a tremendous test, but we feel like we have a good team too. We feel like all four teams left are worthy of being there, and we’re going to go down there Friday and leave it all out there.”

The game will be played on Friday in Savannah at Memorial Stadium with kickoff set for 7:30 p.m.

“We are, I believe, the only game in Savannah and the surrounding area, so we expect they will have a big crowd there,” Glisson said. “I think our people will travel really well.”