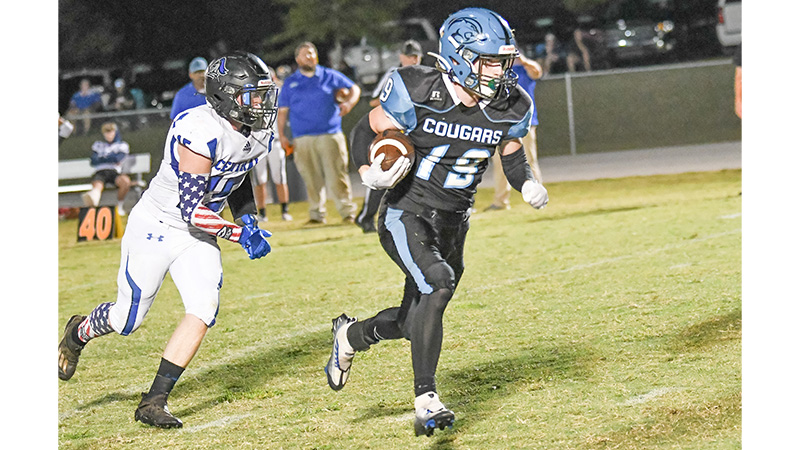 Lafayette Christian senior football player Alex Tusing’s senior year did not go according to plan. Tusing was the leading receiver and rusher for the Cougars in 2021 and looked to resume a big role during his senior campaign. It started well as he helped lead the offense and defense throughout the opening few weeks of the season as a two-way player.

After a blistering opening start, Tusing broke his collarbone which ruled him out for the remainder of the season.

“It was really tough, but I figured I would still be that kid that goes to practice and help show them stuff,” Tusing said. “I wanted to be with them at the games and cheer them on.”

This was the first major injury of Tusing’s football career, and it came at a difficult moment for the senior who was expecting to lead his Cougars to a deep playoff run.

“We had a pretty good chance to go all the way if I had been there because I was captain of the defense and a big part of the offense,” Tusing said. “I came in with the calls on defense, and I was really the only one who knew how to do that. It was really hard to not be able to be there for the team when they needed me.”

The Cougars made a run to the semifinals in the 2022 season but fell to Sherwood in a game that could have really used Tusing on defense to slow down a potent offense.

The Cougars had a big senior class for 8-man football. The seniors — Tusing, Baylor Wise, Braden Firth, Cal Evert, Tyler Dollar, and Andrew Hough — meant more to the program that words can describe.

“People have said that we saved the program,” Tusing said. “There was a senior class bigger than us that left two years ago after my sophomore year. Last year, we toughed it out playing with nine people in an 8-man football league, and we went 6-3. We had no subs, we had to tough it out. The middle schoolers saw that and said ‘we want to go play high school football.’ We had close to 20 people this season. I plan to come back to some of the games, and I’m so happy that we have a team.”

“Fighting with those guys taught me grit, determination, and perseverance. We had our backs against the wall and still went 6-3.”

It is the type of legacy that every high school athlete hopes to leave behind and these six players meant more to the team and school than they likely realize.

Tusing’s legacy goes beyond helping to save the program from extinction. He was a key cog of the 2020 state championship team as a sophomore.

“We went to the state championship in my freshman year, and it was a good experience because it taught me what losing was like and made me want to win even more, and we ended up getting it done and winning the next year,” Tusing said.

Tusing has seen a lot of change in the Cougar football team. After his sophomore season, Lafayette Christian moved from the standard 11-man football to 8-man football which presented some challenges at first, but it was a relatively quick adjustment for Tusing.

“It was weird at first, especially because we went to back-to-back championships in 11-man football,” Tusing said. “I did have some experience playing 8-man in middle school.”

Despite losing the majority of his senior football season to injury, his athletic career at Lafayette Christian has not reached its conclusion yet.

“I’m going to be 100% ready by January, so I will be ready for soccer season,” Tusing said.