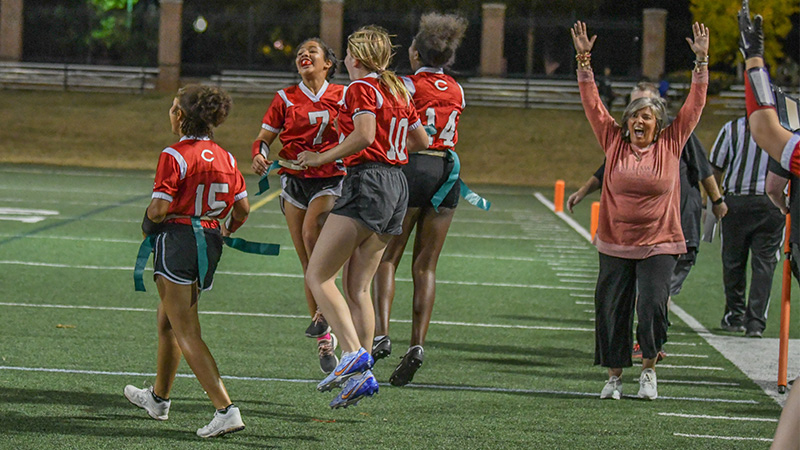 The Callaway flag football took major strides in 2022. In the first year of existence, a season ago, the Cavaliers struggled en route to a winless season.

“To go from where we were last year to this year has been a joy,” coach Eric Woods said. “To watch the growth has been an absolute joy.”

This year saw a change in the air. The Cavaliers made their first playoff appearance as the team grew in confidence during the season.

Nothing gave them a bigger boost of confidence than winning the county championship. After losing to both country rivals last season, the Cavaliers flipped the script in 2022.

“It was incredibly satisfying,” Woods said. “We were in a position a year ago where we lost to both of them, so to be able to beat both of those schools was special. The only reason we were the three seed in the playoffs was because we beat LaGrange and won the tiebreaker.”

The 2022 season ended for the Cavaliers on Tuesday when they lost 19-0 to North Oconee. Callaway had its chances in the game with a long touchdown reception from Lacey Thomas was chalked off due to a penalty and the team dropped two interceptions as well. This was in stark contrast to the type of performance the team put up a year ago. It was the type of game the Cavaliers would have lost 26-0 a season ago, Woods said.

One of the main reasons for the upturn in success was the Cavaliers settling on a quarterback. After a revolving door of quarterbacks a season ago, first year player Mary Kate Baswell took the reins and commanded the offense in 2022.

“We played four different people at quarterback last year, and this year we had two, but eventually Mary Kate Baswell took the job,” Woods said. “She gave us some stability at quarterback.”

Woods also expanded the offense playbook tremendously. After scoring just two touchdowns a year ago, the offense was in need of a revamp.

“We use wristbands with all our plays on it,” Woods said. “As a football coach, I want to call whatever play I want, but they don’t have that background knowledge. First year, we had 12 plays drawn out and really it was only eight because a few of them were right and left. This year we had 24 plays and were advanced enough to where I could call red nine, which is to the left and then call red nine opposite, and they know it’s to the right.”

The offense surrounded Baswell with a talented group of athletic players. Constance Hall was the speed threat, Thomas offered a tall body that could high point the football, and Keiyunna Maddox showed off the best vertical on the team. Hall led the team in receiving this season with nearly 300 yards, but Thomas and Maddox each had over 150 yards a piece.

The most important player for the Cavaliers this season might just have been Malayshia Parham, who starred on defense and offense for Callaway. She was the team’s leading rusher and second leading receiver while also being one of the leading tacklers on defense.

“In terms of leadership and attitude, Malaysia Parham really improved from her sophomore to her junior year,” Woods said.

The defense was the strength of the 2021 team and had another strong going in 2022. Despite missing part of the season with the flu, 2021 team MVP Ava Shuford put together another successful campaign on defense. She led the defense in tackles per game and interceptions. Madison Kemp and seniors Mac Rhodes and Mya Lawton helped keep the defense shored up all season.

The offense has been overly reliant on big plays which is something Woods hopes to push his team away from going forward. He hopes to see his team put together sustained drives in the years to come as the girls continue to get more accumulated to football.

The Cavaliers are seeing six key players graduate and the end of the school year, but Woods singled out some young girls — Deasia Owens, Tyeisha Middlebrooks, Aleyah Dunn, Caniya Poythress and K’mya Carter — that he expects to step up and fill the void left by the girls departing in the spring.

The program is growing on the field, thanks in large part to a dedicated team of talented girls.

“The mental aspect of the game was leaps and bounds ahead of that first year,” Woods said. “You can do more when you understand more and all credit goes to the girls for learning and showing up every day.”

It is not just the growth on the field that has been so impressive. Around 50 girls tied out for the team and 32 made the cut. This was double the total from a season prior. As the Cavaliers continue to win and make progress, interest in the program will only grow inside and outside the halls of Callaway High.