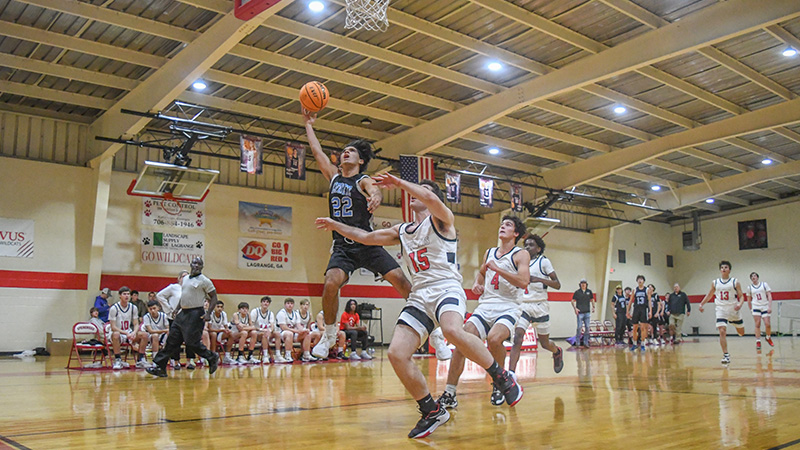 The Springwood boys basketball team looked to rebound after their two point loss to Chambers Academy earlier in the week, but the Wildcats couldn’t stop Lafayette Christian’s Bruno Tellez in Springwood’s 66-61 loss to the Cougars on Thursday.

“He was clutch,” Cougar coach David Gisler said. “Thursday night he was 1-for-10 on 3-pointers and I told him that shooters shoot. He made the key 3-pointer and stepped up and made two key free throws to ice the game.”

Tellez scored a game high 26 points with none more important than the five he scored late in the fourth quarter.

“They have nothing to be ashamed of,” Sampson said.

“That was a heck of a basketball game. There are just little chippy’s around the rim that we just didn’t finish. It’s a testament to their team. They have a talented team. They have two kids that could play at the next level. We’ll continue to get better. We got better today in some areas, and we’ll keep our heads up.”

The Cougars are on a roll now and have beat a quality Springwood team  twice already this season.

The Wildcats got off to a fast start when Eli Westbrook hit a three pointer to open the scoring and hype up the crowd.

Every time the Wildcats scored, Lafayette Christian was able to bounce back thanks to Tellez, who had six points in the first quarter.

Springwood ended the first quarter up 15-11, but Tellez led the Cougars on a massive run that not only gave them the lead but created some cushion as well.

The Cougars scored 19 in the second quarter to give themselves a 30-23 lead over the Wildcats.

Tellez had 16 points in the first half, and Sampson knows that they needed to defend him better.

“We have to know where he is,” Sampson said.

“We have to do a better job. He hit seven threes last time we played. We contained him better. Some of their other kids hit big threes. I thought our press really affected them. We got them out of sync. We got a little tired. I couldn’t run as many guys as I normally do because of the pace of the game. I’m proud of our guys. They always battle. That’s all I can ask for.”

“Joshua is a great shooter and a great ball handler,” Gisler said. “He’s also a good defender. He does all three aspects of the game pretty well. He hit a half courter in overtime to win here last season , so this gym is probably pretty special to him.”

Springwood made every effort possible to close the lead, but the Cougars were hitting shots when they needed to in the fourth quarter.

With a little over a minute left, Eli Westrbook hit a clutch two point shot to tie the game at 61.

After another Tellez three pointer, Eli Westbrook was called for an offensive foul that negated any chance of Springwood c0ming back with 10 seconds left.

A Tellez free throw after the foul sealed the game for the Cougars, and the Wildcats lost their second straight.

Sampson is pleased with Westbrook’s effort after he scored 11 in the fourth quarter.

“Eli makes everybody around him better,” Sampson said.

“He barely comes out of the ball game. He had a great game. He missed a couple shots that he normally makes, but we’ll be just fine.”

Westbrook was Springwood’s leading scorer with 20 points while Micah Thomas was second with 19.

Lafayette Christian starts the season 3-0. The Cougars will be back on the court at home against crosstown rivals LaGrange Academy on Friday.