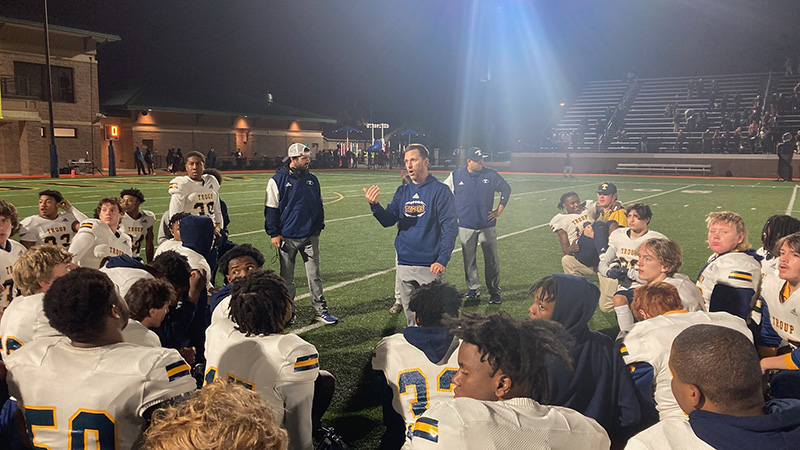 One of the greatest, if not the greatest season, in Troup football history came to an end on Friday night when the Tigers fell 42-21 to Benedictine.

“That’s a really good football team we just played, and they are hunting for back-to-back state titles,” Troup coach Tanner Glisson said. “We fought really hard in the second half, but they were just better than us tonight.”

Nothing went right for the Tigers in the first half as they trailed 35-0 at the break. Troup had its chances early. After the Cadets took a quick 7-0 lead on the opening possession of the game, the Tigers drove down to the 15-yard line, but the drive stalled and an incompletion on fourth down gave the ball to Benedictine.

Benedictine promptly drove the field and scored a second touchdown to take a commanding 14-0 lead early in the first quarter. Troup thought it answered back on a long throw by Taeo Todd, but a drop by a Tiger receiver in the end zone set up a long fourth down that once again ended in a turnover on downs.

“There were some missed opportunities, but the big thing was us giving up 35 points in the first half,” Glisson said. “We didn’t play very good defense.”

Benedictine once again turned the Tigers turnover on downs into a touchdown, taking a 21-0 lead before the end of the first quarter.

After a rough first quarter for Troup, it looked like things might turn around after the Tigers got a fourth down stop near midfield to get the ball back early in the second quarter. Troup was able to drive down the field and the Tigers thought they scored on a 16-yard touchdown from Todd to Qua Moss. However, the touchdown was called off on an illegal man downfield penalty that forced the Tigers into a fourth and long play near the 30-yard line that came up short.

“I guess we tricked everybody in the stadium and the referees on that one,” Glisson said. “We had a touchdown called back that should of stood and that happens.”

Bad went worse for the Tigers when a blocked punt turned into a one-play scoring drive. The Cadets connected on a 40-yard touchdown with 1:58 left in the first half to make it 35-0. The Tigers fumbled the next possession near midfield, but a Moss interception in the end zone effectively ended the half as the Tigers had only 49 seconds to drive and only ran one play.

The second half saw the Tigers come to life a little bit. Todd hit Moss for two touchdown passes and a late touchdown to Malakih Poythress.

“We had a decision to make and I asked the guys if they wanted a running clock and went home or they could play it out,” Glisson said. “They wanted to play for pride, and I think they did that in the second half.”

Making the semifinals, especially in a classification as competitive as AAAA is a tough task. This was only the third time in program history the Tigers made it this far and gave themselves a lot to build on going forward.

The Tigers, like every other team, will have seniors departing at the end of the season. All-Region players (linebacker) Tray Blackmon And Region 4-AAAA athlete of the year Moss who made a big impact at three positions — wide receiver, cornerback and returner.

But that is the nature of the beast, inexperienced players come in, get experience and then have to move on. Now, Glisson is looking to get over the hump and reach the first championship game in program history.

“We have to get over that hump, but the good thing is that we are at the hump,” Glisson said. “Getting to the state championship game is hard to do. We’ll figure it out. In January, we’ll be ready to run it back.”