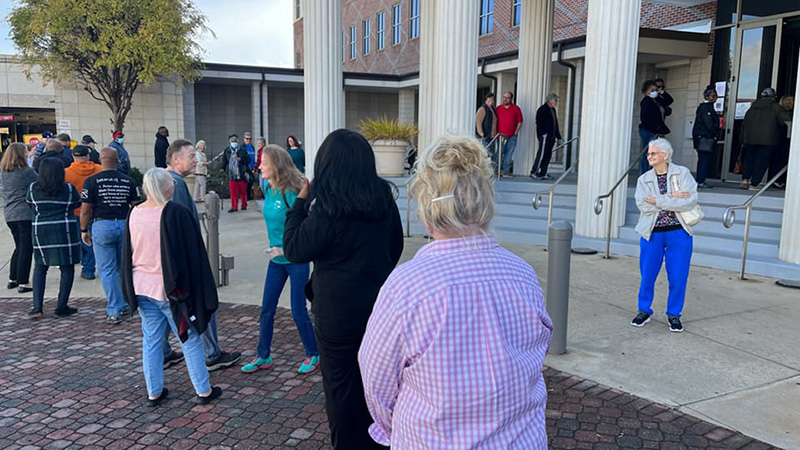 Advance in-person voting came to a close on Friday, with nearly 10,000 votes being cast in Troup County with the inclusion of absentee votes.

Elections Supervisor Andy Harper said 8,775 in-person votes were received as of the close of early voting polls on Friday. A total of 855 absentee votes had been received and accepted as of the start of the weekend for a total turnout of 9,630.

The total absentee votes do not include ballots received over the weekend and beyond, which have yet to be counted. All absentee ballots are due by the close of the polls on Election Day.

Statewide, over 1.8 million votes have been cast through early voting, according to the Georgia Secretary of State’s office. The state has accepted 1,713,405 in-person votes through Friday with 154,176 absentee ballots accepted.

The turnout is similar for Troup County at 22.9 percent of the county’s approximate 42,114 active voters.

On Friday, the final day of early voting, 352,953 people cast ballots throughout Georgia, beating the previous single-day record of 304,683, which was set a few days earlier on Tuesday, Nov. 29.

Georgia’s large statewide turnout comes on the heels of a highly-contested senate race between incumbent Senator Raphael Warnock (D) and challenger Herschel Walker (R). Their earlier race ended in a near tie with a slight lead for Warnock. Neither candidate received a majority of the votes, so the runoff was required under Georgia Law.

In half of LaGrange, there will be an additional race on the ballot. Leon Childs and Quay Boddie are facing off in a runoff in a special election to fill the District 2 city council seat of the late LeGree McCamey.

Both candidates encouraged everyone to vote regardless of the candidate they choose.

“Everyone get out and vote. It doesn’t matter whom you vote for. Just vote,” Childs said.