Athlete of the week: DeShun Coleman is a leader for the Cavs football and basketball team 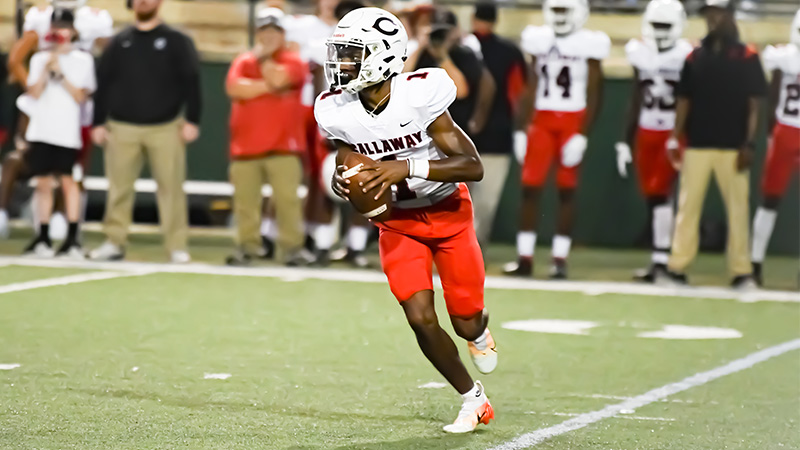 DeShun Coleman is a leader on the gridiron and the court for the Callaway Cavaliers. The junior is the starting quarterback for the football team, and the starting point guard on the basketball team and commands both offenses with a poise and confidence beyond his years.

“I think I improved a lot this year,” Coleman said. “It was not alway easy, but I have had to step up and help lead both teams.”

Coleman is currently transitioning from football right into the basketball season — a transition that certainly comes with challenges.

“We do a lot more running at basketball practice, so I have to eat a lot more,” Coleman said. “I have to get in the weight room a little bit and find my shot.”

On the gridiron, Coleman enjoyed his most successful season yet. He finished the season with 1,213 yards passing while adding 366 yards on the ground with 15 total touchdowns. What makes this even more impressive is the fact that he put up these stats on a team that is looking to run downhill with its powerful stable of running backs.

It was not always an easy season for the Cavaliers, who started 0-3 before going on to win the region title and make a run to the quarterfinals.

“It was kind of crazy to start 0-3,” Coleman said. “We had to show character and fight back, and we had to learn a lot from it. We were down a little bit, but me, as the starting quarterback, had to keep us up, and I think I played a big part in that.”

It was not an overnight success story as Coleman grinded in the offseason to improve on a good sophomore season.

“I had to take on a bigger role this year,” Coleman said. “My sophomore year we had a lot of older receivers who helped me out. I also didn’t have to run as much. I got better with how I used my legs, and I feel like my vision improved as well.”

Now, he is taking his talents back to the court. He was a major contributor on a Cavalier team that won the region title last season.

“I want to win a region title again this year and make it out of the first round of the playoffs, which we didn’t do last year,” Coleman said. “The main goal is to win state.”

Coleman has lofty goals, but that is to be expected in a family as talented as his. His older brother — Demetrius Coleman — was a standout at Callaway before departing to play college football. Coleman no longer has to live under his brother’s shadow, but his father — Kenny Coleman — is still around the Callaway program to help and offer him advice as he continues to develop as an athlete and as a person.

Coleman did not start playing football until middle school as basketball has been his main priority. If he keeps playing like he has been on the court and on the gridiron, he will likely have two avenues to continue his athletic career in college.

“That would be tough,” Coleman said. “I would probably lean toward basketball because it has always been my dream to play in the NBA. I won’t look past football though. That is a big option for me too.”