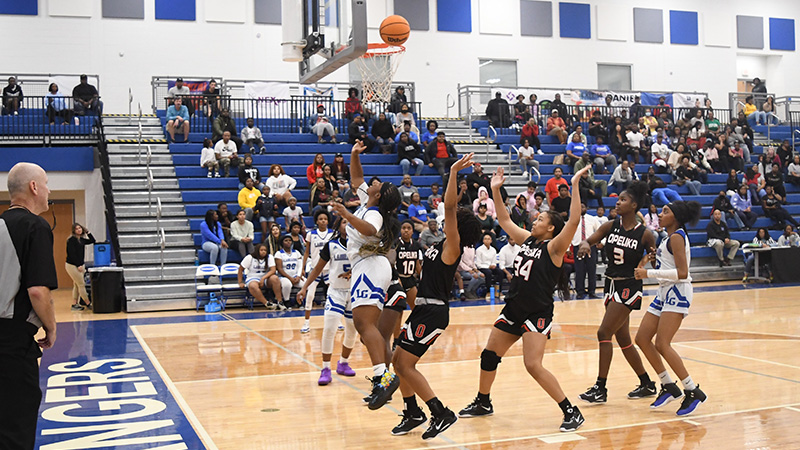 LaGrange High girls basketball earned its first win of the season in dramatic fashion with a 49-48 victory over Opelika on Tuesday.

It was Corriah Williams who hit a layup with under 10 seconds to go in the game to lift the Grangers to victory.

“It felt great to have my coaches’ confidence, but I was nervous at the same time,” Williams said. “I handled it and did what coach [Stephen] Tuck said.”

The Grangers inbounded the ball trailing by one point with 17 seconds to go. Williams took the ball the length of the court, into the lane and finished with a calm confidence under the rim to lift the entire LaGrange gymnasium off their seats. Williams only had five points in the game, but her four fourth quarter points were essential for the Grangers down the stretch.

This was the exact moment the Grangers needed to help kickstart their season.

“I think I’m going bald,” Tuck said with a chuckle. “I’m just so happy for these girls. They have been fighting and pushing hard.”

The Grangers led early and took an 11-10 lead into the second quarter, but the offense stalled out and the Grangers fell behind by seven at the half. The Grangers trailed by six going into the fourth quarter as the third proved to be a bit of a stalemate.

The fourth quarter was full of heroics from the Grangers. Brittney Heard hit a free throw to tie the game at 42 before hitting a layup next possession to give the Grangers their first lead since the first half with a little over three minutes to go in the game.

“This is an unreal feeling,” Tuck said. “We had great support behind us. The bench was super into it. I loved every minute of it.”

Heard was magnificent with 13 of her 15 points coming in the second half. Peyton Swint was dominant and scored a game high 18 points.

The Grangers improved to 1-4 on the season. LaGrange will host Harris County on Friday.

“The girls are pushing hard in practice and want to win so badly,” Tuck said. “I told them at the end of the game that I was so proud that they never gave up. We had a chance to give up there in the fourth but didn’t.”