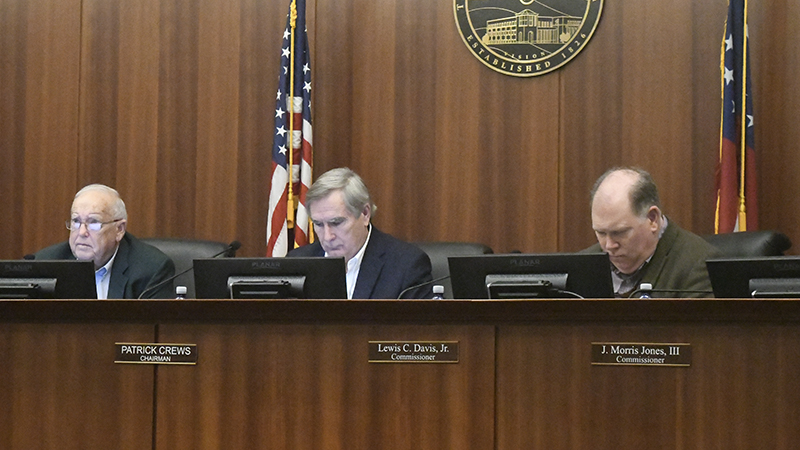 The Troup County Board of Commissioners approved a resolution for a referendum for the proposed SPLOST VI during its regular meeting on Tuesday evening.

The measure, which was approved unanimously, includes a negotiated intergovernmental agreement between LaGrange, Hogansville, West Point and Troup County.

Under the agreement, the money from the potential SPLOST would be split 45-45-5-5. LaGrange and the county would receive the majority of the funds at 45 percent each and Hogansville and West Point would each get 5 percent.

The referendum will be presented to the voters to decide on March 21, 2023.

County Manager Eric Mosley said all three cities have previously signed off on the intergovernmental agreement, so it was up to the county for the final signature and to call for the referendum to be placed on the ballot in March.

“We’ve been working very hard with the three cities over the course of the past few months to pull together and certainly look forward to these excellent projects for our citizens,” Mosley said.

If approved by the voters, the county will begin collecting SPLOST VI in January 2025.

After the measure was approved, Commission Chairman Patrick Crews publicly commented on the SPLOST and Service Delivery Strategy negotiation process, following recent comments that were made by West Point leaders.

“Most of the public doesn’t realize what a process it is we go through every ten years here to sign this agreement. It takes a lot of work between all the communities to do that,” Crews said, referring to the Service Delivery Strategy (SDS) that the City of West Point was unwilling to sign off on.

SDS passed in May 2021 after a 10-month process that involved the county and the cities of Hogansville, LaGrange and West Point. LaGrange, Hogansville and Troup County approved it. West Point did not.

“I was very disappointed the other night to read some comments in the media that the county, which I’m assuming they are they are referring to the county commissioners, did not have much regard for the 1,700 citizens in West Point.”

Under the agreement, $4 million was allocated off the top for repairs to roadways around Kia due to the plant’s countywide significance. The repairs are now estimated to cost about $7.8 million, which West Point City Manager Ed Moon has indicated the city cannot afford to make up the difference.

“They do not look at the fact that we have 10,000 people here every day and that we have to provide police and infrastructure for those people,” Trammell said, adding that the county “looks at us 1,700 people that do not elect them or unelect them, and they don’t care.”

“That was very disappointing to hear,” Crews said. “We all represent a part of municipal governments and our community. Someone on this board represents at least a portion of every city government, and we take that responsibility very greatly. We do appreciate those citizens. We work very hard with those other communities to try to come up with this agreement,” Crews said. “As we all know, there’s going to be things about it that we don’t particularly like, but we all have to come together as a community and do that.”

“Unfortunately, the leadership of that one community decided that it was more important for them to spend lots of money with consultants and … attorneys to try to hammer out an agreement.” Crews said.

County Attorney Jerry Willis interjected, pointing out that the previous Service Delivery Strategy agreement has already been made and that only the SPLOST agreement was before the board at the time.

“I just I just wanted to be known that we, as a board, take those comments very seriously, and we do appreciate the citizens of all the communities,” Crews said. “So, in approving the SPLOST and the SDS, we did take great pride in representing those citizens.”