Diabetes doesn’t define him: Cooper Dolhancyk is a difference maker for the Panthers 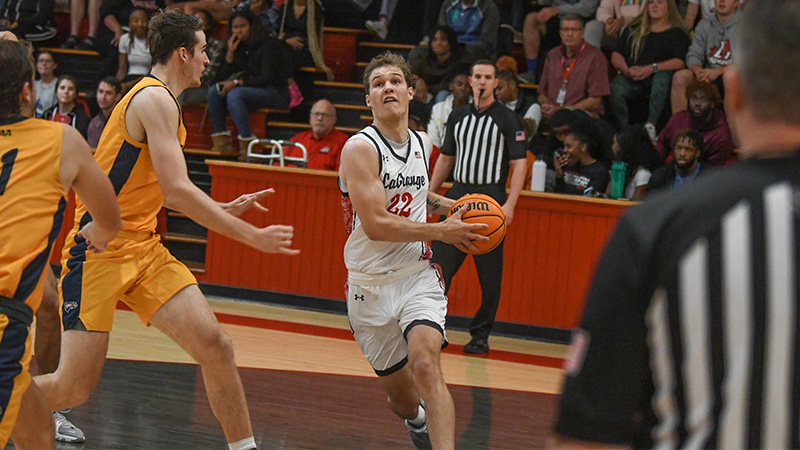 Cooper Dolhancyk has not had an easy path in life. His basketball journey has led him to LaGrange College, and it was a long trek full of highs and lows.

Dolhancyk is a severe diabetic — it does not define him, but it has been a constant presence in his basketball career and life in general.

It is a team effort to keep Dolhancyk healthy and active on the court.

“One of the constant battles I have had is managing my blood sugar levels,” Dolhancyk said. “Coach (Kendal) Wallace and the training staff make sure I have my insulin on hand and proper drinks. They make sure I have everything I need when I’m out there on the floor.”

He was diagnosed when was just six years old. Practically his entire basketball career has been influenced by this battle. It is all he has known for almost 15 years of his life.

He was able to earn multiple college offers coming out of McIntosh High School. He limited it down to three schools before ultimately deciding LaGrange was the right spot for him.

“My final three schools were Maryville, LaGrange and Covenant,” Dolhancyk said. “Something about LaGrange just felt right. With LaGrange’s academics and athletics, it felt like the best fit for me and so far it has been.”

Dolhancyk’s role on the team has morphed over the years as he is almost halfway through his junior year in college. His freshman year was a wash as the team only played a handful of games with Dolhancyk never even seeing a minute of action.

He kept grinding and instead of putting his name into the transfer portal, he carved out a spot in the rotation a season ago. Dolhancyk started 10 games in the 2021-22 season. This year he has started four of the team’s 10 games and is averaging over 20 minutes per game so far.

“My freshman and sophomore year I was just in the mindset of trying to score a basket,” he said. “My maturity and my basketball IQ have really developed over the first two and a half seasons I’ve been here.”

Dolhancyk is a big bruising presence down low. He uses his 6-foot-5 frame to get defenders off-balance.

“I was six feet tall in middle school,” Dolhancyk said with a laugh. “I just kept getting bigger, so I have always played the four or the five position.”

He has improved his playmaking ability since arriving at LaGrange College back in 2020, which has allowed him to see the court more. It is still a facet of the game he is working to improve on his quest to fulfill his full potential as a basketball player.

Dolhancyk has no regrets about coming to LaGrange College. Playing in games like Wednesday’s match with no. 21 Emory in front of a rambunctious home crowd is what his young basketball dreams were made of.

“I try to embrace it,” Dolhancyk said. “If we just make a layup, the whole gym starts vibrating. It is an awesome experience.”