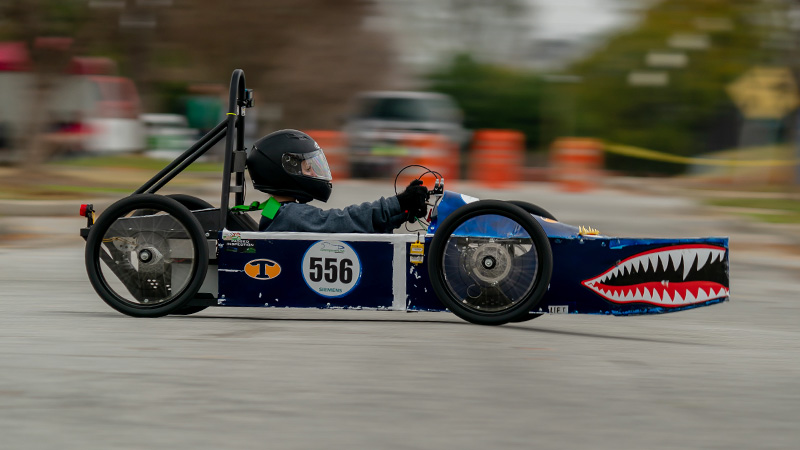 Nine GreenpowerTroup teams from five TCSS schools competed at the F24 Santa Sprints in Columbus on Saturday as well as Lafayette Christian representing the area. This was the third time a race has been held at this location since February 2021.

The five schools represented were:

Lafayette Christian School competed at this event and placed fourth overall in the stock division with a score of 90.722 out of 100.

It was the first race event for Callaway Middle School’s new 821 team. They have a new teacher/coach Ms. Kenya Bugg. They placed 2nd in the stock division endurance race just 3 laps short of Long Cane’s 555 team, which is a fantastic performance for their first race as a team.

Callaway High School really got going with Greenpower last year and finished fifth for the custom division in the national points standings. They added a second team/car this year and their first race event for that team was the F24 Santa Sprints on Saturday.

This was the second race of the season for THINC Academy which has rebuilt its team and car for this season, led by new coach John Johnson. They placed fifth overall in the stock division with a score of 65.391 out of 100.

This was Long Cane’s 31st race event since their first in April of 2018.

Lafayette Christian School competed at this event and placed fourth overall in the stock division with a score of 90.722 out of 100.

For the national champion Cougar Strong race team, it was business as usual.

The eighth grade triple nine team won first overall in the modified division with a score of 100 out of 100. They had the highest scoring team video presentation of all teams competing (including the high school teams) with a perfect score of 100. The lead video editor for the presentation was Owen Tucker.

They logged more laps than all other teams competing, including the high school teams. They logged 76 laps around the 0.42 mile track during heat one, and another 76 laps during heat two for a combined total of 64 miles driven by the three drivers: Drew Pearson, Caroline Harry, and Lillian Johnston. They had no electrical or mechanical failures during either of the race heats, which is a testament to our pit crew, led by Pit Crew Chief Preston Strickland and Asst. Pit Crew Chief Clint Tanner.

The seventh grade triple zero team won second place overall in the modified division with a score of 96.618 out of 100.

The seventh grade team had the fourth best team video presentation score of 98.5, outscoring all high school teams and all but three middle school teams (two of which were Long Cane teams). Our lead video editor for the presentation was Katalina Synoground. They logged 72 laps during heat one (just four shy of the first place 999 team) and 64 laps during heat two due to an electrical issue near the end of the race. Their combined distance driven by Aaron Ellison, Katalina Synoground, and Jaxon Hull was 57.12 miles.

The  sixth grade triple five team won first overall in the stock division with a score of 98.5 out of 100. They had the third highest scoring team video presentation of all teams competing with a score of 99 out of 100. They outscored all high school teams and all but 2 middle school teams (Long Cane’s 8th grade team and Lafayette Christian School’s 101 team). The video was directed and produced by Camryn Nunis and Chloe Kim, and edited by Emily Umfress.

All of the team video presentations are posted on the Cougar Strong Racing YouTube Channel.

The next GreenpowerUSA race event will be the Oxford Green Prix in Oxford, Alabama on January 20 at Choccolocco Park.