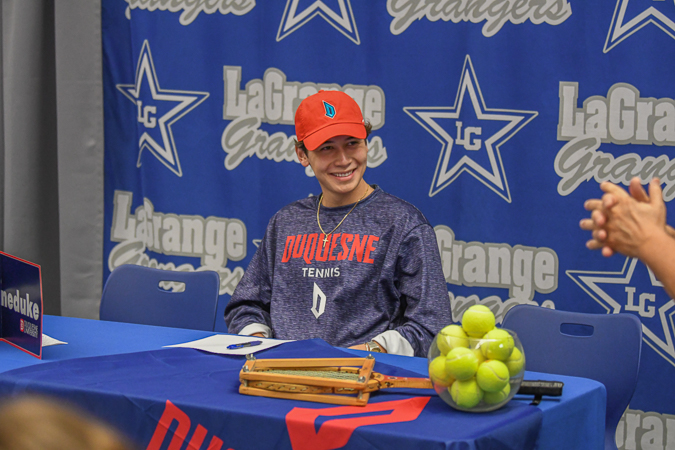 Pierce Manning has had the dream of playing tennis at a Division I university practically his entire life. It is what he has trained and prepared for. What he has put blood, sweat and tears into. Now, he has the opportunity to be an early enrollee at Duquesne University and continue his playing career.

“This is surreal,” Manning said with a laugh. “Last night I didn’t sleep much. I was thinking about everything that is about to happen. It sucks that I will miss some of my senior year, but I can’t  miss out on this opportunity.”

The decision to forego his senior season on the court for LaGrange High was the most difficult one he has made in his young life.

“I’ve been stressed about it, but I know God has my back,” Manning said. “I’ve been training for this my whole life. I’ve been lifting more recently and trying to put on more weight. I should be prepared.”

In just a couple of weeks, Manning will be heading up to Pennsylvania to start the next step of his tennis career. Enrolling early is a testament to his commitment to his academics as well as his commitment to a university he has envisioned himself attending for quite some time.

“It’s crazy that last year I was hanging out with one of my friends who plays tennis there, and he said ‘hey wouldn’t it be cool to come and play with me at Duquesne?’” Manning said. “A year later and here we are. It’s crazy how things work out.

The Grangers will be losing one of the best tennis players in their storied history. Manning was the Grangers no.1 player as a junior last season, and he will be impossible to replace.

The coach and player bond was strong between these two men.

“What coach Moore said meant a lot to me,” Manning said. “To spend the last three years with him as he helped me develop my game and help me be a better person has been special.”

Manning’s time at LaGrange is coming to an end. For his friends, it will be one last semester in halls of LaGrange High, but for Manning it is going to be a fresh start next semester. He has already packed all his winter gear in anticipation.