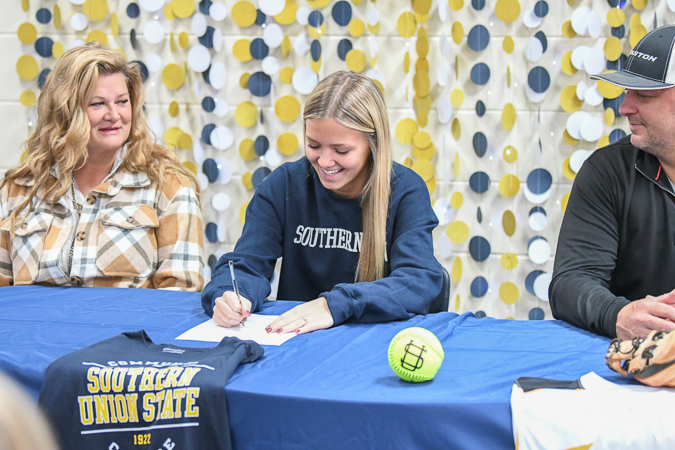 Troup High’s Ramsey Clark has been a key figure for the Tigers softball team the last three seasons. Clark is graduating a year early and will be departing in the spring with her high school diploma and taking her talents to Southern Union.

“I’m more excited than anything, but it is bittersweet,” Clark said. “It makes me a bit emotional, and I’m sad that I will be leaving.”

Clark started at shortstop for the Tigers in her senior campaign, but it’s her versatility that makes her such an asset.

“She played third base, shortstop and even pitched a little,” Troup coach Ryan Simpson said. “She did whatever we needed her to do.”

Regardless of where she played, Clark excelled. She finished her senior season hitting .389 with a .414 on base percentage to go along with 12 RBIs and 18 steals. She was the 2020 defensive player of the year and made first team all-region this season.

Clark has always been a defensive stalwart for the team but took major strides to improve her offense this season.

The Tigers made the state quarterfinals every season Clark played on the team and shared a special bond with her teammates that she grew up with and accomplished so much alongside.

“This year’s team has been the closest of any I’ve ever been on,” Clark said. “We hang out outside of school, and I am sad that I will have to leave my friends.”

Clark will be packing her bags in the not too distant future, but she will not have to travel too far. Southern Union is just under an hour travel distance from LaGrange. With Southern Union being a community college, Clark plans to play two seasons and see where things lie after that. She hopes to continue her softball career after Southern Union but knows that her next step may be the end of her softball journey. Whether she gets to play or not, she dreams of heading to Auburn University after her two years as a Bison come to an end.

The decision to leave high school early was not an easy decision. It took some thought and some discussions with her parents and coaches. With graduation looming, Clark has been feeling the full gambit of emotions.

“At first I feel like this was an easy decision, but once I started to think about me leaving early it made it more tough,” Clark said. “Thinking about what I’m going to have to leave behind makes me sad, but I’m excited for a new start.”