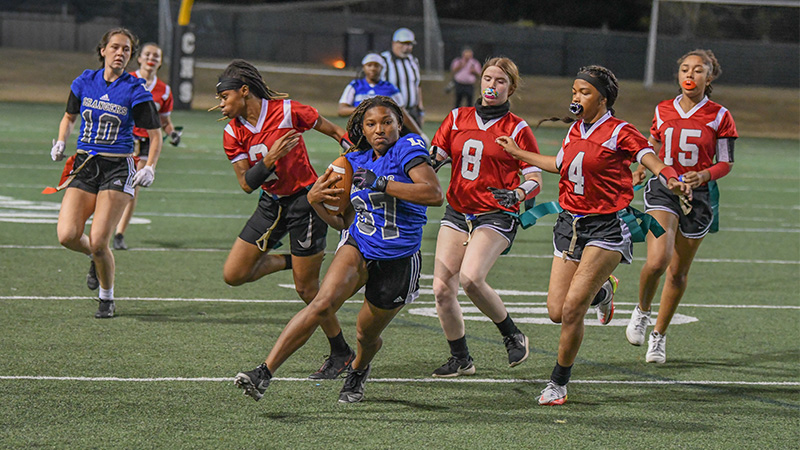 The All Area 5 flag football team was chock full of Callaway and LaGrange players as the teams finished third and fourth in the area respectively.

The Cavaliers had three players named to the first team and an additional two on the second team.

Malaysia Parham was the breakout player for Callaway this season and earned her spot with her two-way play as a safety and do-it-all type player on offense. She was tied for third in tackles per game while also leading the team in pass deflections. On offense, she led the team with 179 rushing yards and was second on the team with 209 receiving yards.

The other first team player for Callaway was Ava Shuford, who was the team MVP a season ago. Despite missing a portion of the season with illness, Shuford still dominated offenses from her linebacker spot, leading the Cavaliers in tackles (26) and interceptions (4). She, like the other two first team Cavaliers, is just a junior and will be able to build on her already impressive start as a flag football player.

On the second team for Callaway was junior quarterback Mary Kate Baswell.  After splitting reps early, Baswell took the reins as the season progressed and kept the offense rolling with her leadership. She finished the season with 882 passing yards, seven touchdowns and was second on the team in rushing yards (85).

The player she split quarterback reps with early in the season — Madison Kemp — also earned a spot on the second team. She was everywhere for the Cavaliers as a sophomore, playing linebacker, wide receiver and quarterback at various points. She was a standout on defense where she was second on the team with 25 tackles. Kemp also registered two passing touchdowns, a rushing touchdown, a receiving touchdown and an interception.

For the Grangers, they had three players named to the first team and two to the second team as well.

The Grangers’ three first team players were the heartbeat of the offense. Senior quarterback Corriah Williams has led the offense for the first two seasons in program history and will be hard to replace.

The other two players on the first team were wide receivers Carlee Roland and Sam Cottle. Both are stars for the soccer team and equally as adept at playing football. Roland has been playing football so long that putting a flag on and taking pads off only made her lighter on her feet. She played at Gardner Newman and became the first girl to ever suit up for the Granger football team during her freshman year.

Cottle built on a big sophomore season with the Grangers flag football team by excelling again as a junior.

Tatiana Dudley was the team’s leading rusher and was a key contributor on defense to earn a spot on the second team. Zamyia Thornton was everywhere for the Granger defense. She dominated from her linebacker spot to lead the LaGrange defense. Thornton will be hard to replace as the senior was one of the heartbeats of the defense.

All together, the Cavaliers and Grangers had 10 players on the All Area teams as the sport of flag football continues to grow in Troup County.