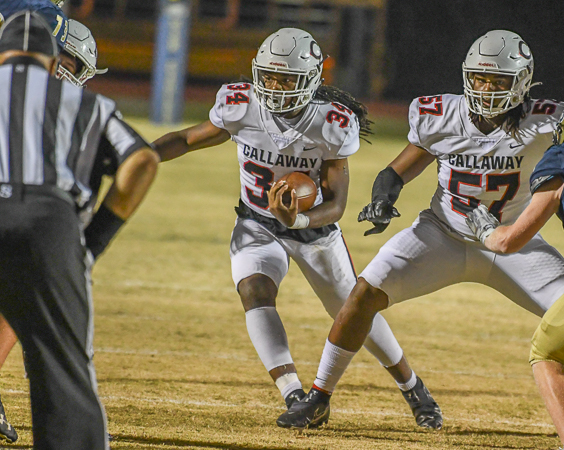 After marching through region 5-AA with relative ease and making it all the way to the quarterfinals of the AA state playoffs, it should come as no surprise that the Callaway Cavaliers dominated the all-region team.

On the first team alone, the Cavaliers had 13 players.

Qua Whitfield was one of those players, unsurprisingly, and also received the Offensive Player of the Year award for Region 5-AA. Whitfield was another excellent running back in a long line of top quality Cavalier backs and left his mark after running for 2,266 Yards and 28 touchdowns during his career.

Whitfield was not the only bruising back for Callaway as Jordan King made second team All-Region and will return as the likely lead running back in 2023 as a senior.

While not an official member of the all-region teams, Dylan Stephens was a force for Callaway this season. His play in all three phases — offense, defense and special teams — earned him the Region 5-AA Iron Man of the Year award. He finished with 37 tackles, nine tackles for a loss and 2.5 sacks while also having a rushing and receiving touchdown in his ledger.

Special teams were a huge part of the Cavaliers success this season. Junior kicker Greyson Batchelor and senior long snapper Dylan Nation — who has multiple college offers on the table — were both named to the first team. Batchelor will be back for his senior season and bring some continuity to the special teams department. Junior punter Ryan Seagle made the second team and will also have a chance to build on a strong 2022 campaign.

The backend of the defense was also a strength for Callaway. Cam Tucker, Korey Jackson, and Karmelo Burton all made first team with Kavious Leonard getting second team at the defensive back spot.

Tight ends Sam Williams and Exavious Reed both made the first team. These two guys were more than just tight ends as they offered something on both sides of the ball. Williams will be playing ball at Wake Forest next season while Exavious Reed will be suiting up for Southern Miss.

The Cavaliers will be returning first team All-Region wide receiver Treyonn Tucker as well as second team member Bryceton Sanders. Returning these two skill positioned guys will help soon to be senior quarterback DeShun Coleman, who was named to the honorable mentions list.