Troup hosts wrestling under the lights on Thursday 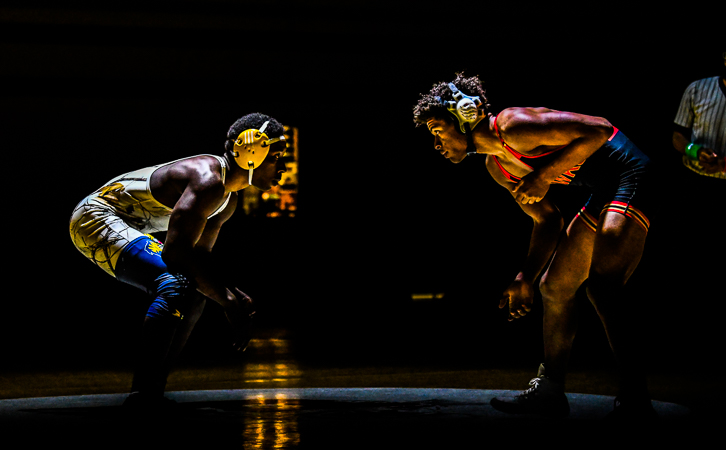 The Troup Tigers held a slammed evening of wrestling on Thursday in their old gymnasium. With a start time of 5:30 and an end time after 9 p.m., it was a true marathon.

“If you wrestle against the best, your style and mentality will become better,” Troup coach Drew Garner said. “Every team we scheduled at home this season except Hardaway has beat us in the years prior.”

The first match for the Tigers saw Smiths Station — one of the top five teams in Alabama — beat the Tigers 48-30. It was a learning experience for the Tigers as they sharpen their claws early in the season.

“We wrestled much better against Smiths Station than I expected,” Garner said. “We were missing two key starters, and both of those guys would have made a big difference in the outcome of that match.”

The second match was against old region foe Hardaway, who is predicted to win its new region this season. The Tigers came out on top 45-30, but it was not all positives on the night.

“We won against Hardaway, but I don’t think we wrestled as well as we did in the match before,” Garner said. “It is not about now, it is about battle testing these guys for later in the season.”

There were a ton of impressive performances for the Tigers, but none stood out quite like Evey Hill. She got a pin with .7 seconds left in the second period in the last match of the night against the Hawks, sending the crowd into an uproar.

“The girls are out hearing pinning varsity guys from quality schools,” Garner said. “She’s already pinned a girl who finished fifth last year at state. She is just a freshman and has a bright four years in front of her.”

The gym was split into two sides with the varsity team wrestling on one mat and the JV teams wrestling on the other. Troup also had some of their wrestlers up from its Long Cane Feeder program.

Once the JV matches ended, Troup turned out all the lights outside of one single spotlight on the center of the varsity mat. The boys and ladies had to line up across from each other with only the two opponents and the ref visible to those that lined the stands. It was wrestling in its purest form, 1v1 with all eyes on the athletes in the center circle.

There were moments of joyous pandemonium as well as quieter moments when the tension ratcheted it up so high, you could hear a pin drop.

Troup wrestling which was once the crown jewel of the Troup athletic program as it won state title after state title. It fell to the wasteside for years, but now under Garner it is returning to prominence. The Tigers are favored to win their first region title since 2018.

“We won our first county championship last year, and we want to win our first region title since 2018 when I was coaching with my brother here,” Garner said. “The next step is to win a region title and make a deep run in the state playoffs.”