Athlete of the week: Garrett Jacobsen is more than just a hooper 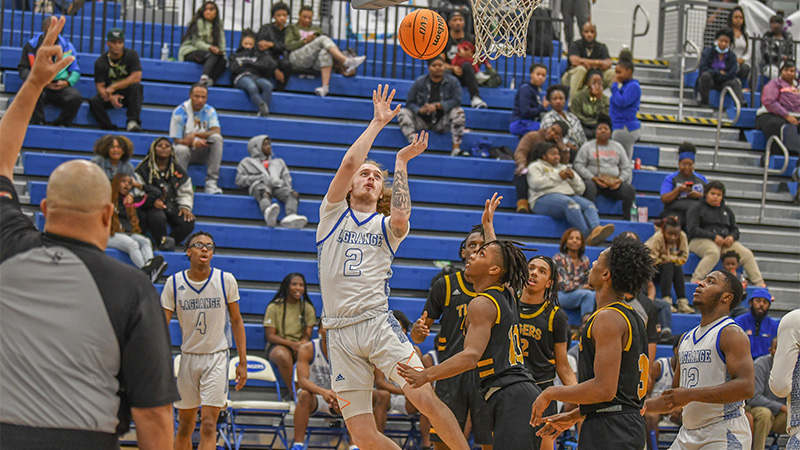 Garrett Jacobsen is on his way to earning his varsity letter in basketball at LaGrange High for the fourth straight year. The senior forward has been an integral part of the lineup every season he has been a Granger even as his role has changed over time.

“Being Granger is more than just basketball,” Jacobsen said. “ You have to be good on and off the court. It is about showing respect wherever you go. It means a lot to me to be a Granger.”

Jacobsen has big goals as he goes through one last ride as a Granger.

“I want to win region,” Jacobsen said. “We’ve got close but never won it while I’ve been here. I think we can make a deep run at state.”

“Individually, I want to average a double-double.”

Jacobsen currently averages 10 points and eight rebounds for the Grangers and has gotten to take the fourth quarter off of many a game this year with LaGrange cruising by some of the opponents it faced so far.

“That ninth grade season was crazy,” Jacobsen said. “That season was unforgettable. Starting off 17-0 is not something that happens very often.”

This feels like it could be another special season for the Grangers. LaGrange has 11 seniors on the team.

“A lot of us have been playing AAU travel basketball together,” Jacobsen said. “The chemistry is great. You can feel it out there on the court and even in practice. We know where everybody else is going to be and how they play.”

This might be the final season that Jacobsen plays competitive basketball. He has dreams of going to school for fashion design and is not sure that basketball will be the same for him after

“I don’t think I’m going to continue to play,” Jacobsen said. “I want to go to college in Atlanta for fashion and marketing. Last year, I started my clothing brand and it is something I’ve wanted to do for a while but did not know how to start.”

Jacobsen has been playing basketball since he was nine. Both of his parents played, but it was something he found naturally. He is sad his basketball career might come to an end in 2023, but he is also content with moving on.

Knowing this coming into the season, Jacobsen prepared himself to be a better player and leader.

Jacobsen will be suiting up in the blue and white for the Grangers into the new year. You can catch him back on the court Monday when the Grangers travel to take on Carrollton.