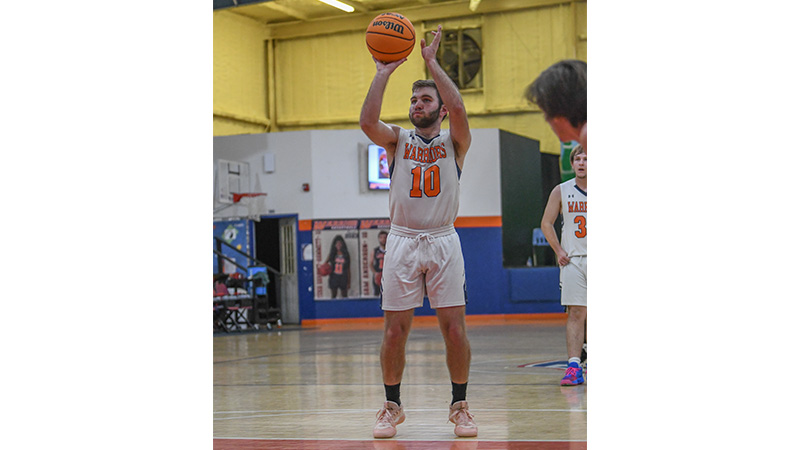 Sam Anderson is the heartbeat of the LaGrange Academy boys basketball team. As the only senior on the team, he sets the tone for the younger guys that do not have the same level of basketball experience as him. He has been playing basketball at LaGrange Academy since he was in the sixth grade.

“I try to help the young guys see the game from a different perspective,” Anderson said. “Most of these kids didn’t grow up playing basketball like some of the older guys. I’m happy to share my basketball IQ with them. Sometimes I show by example, and sometimes I pull them aside and talk about things.”

It is a transition period for the Warriors as they welcome in Britt Gaylor in his first season back as LaGrange Academy’s boys basketball head coach. He has re-energized and rejuvenated a team that had been stale in recent years. Gaylor has been a driving force for Anderson on the court, but he has also helped make Anderson’s senior year successful away from the game of basketball.

“He’s in charge of student life at LaGrange Academy, and he does a great job of making sure all of us seniors are having a great year,” Anderson said. “He’s always asking us what he can do to make this year better. He is really great at that.”

Transition periods are nothing new for Anderson, who transitions in and out of sports with the changing of the seasons. He goes from soccer to basketball to baseball with precious little time off between sporting seasons.

“I don’t even get two weeks before I’m starting something new,” Anderson said with a laugh. “You finish up the basketball season, and it is such a long season that you want a break, but you get about a week, and then you are starting something else. It can be tough, but at the same time it is nice to be able to play different sports.”

He is hoping that LaGrange Academy will have a baseball team this season after not having one a year ago — something that remains up in the air. Anderson took it in stride in his junior year and decided to play tennis in the spring instead.

It was not the easiest of transitions for Anderson as basketball and baseball have been the main two sports all his life. His junior year was the first time he had ever played competitive tennis before.

To be able to play so many sports is one of the many blessings Anderson finds at LaGrange Academy. The small tight-knit nature of the school makes it feel like a big family.

Anderson still has a semester to go at LaGrange Academy with more basketball games to be played as well as another full sports season that has not even kicked off yet. His immediate future is still at LaGrange Academy, but be has eyes on attending the University of Georgia in the fall of 2023, which means that his competitive sporting career will be winding down in the coming months.

“It really hasn’t set in yet, but I’m sure it will after Christmas break,” Anderson said. “Once we get back and we start to have our last home games and senior night and stuff like that it will put it in reality. I still hope to get on the court here and there.”