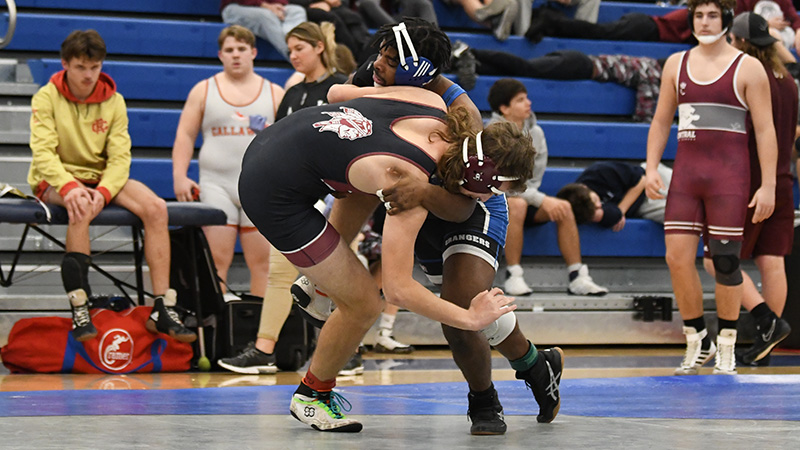 Tuesday was a special day for the LaGrange wrestling team, and its first year coach Michael Pharis. The team hosted the annual Gary Silva Invitational, which has been going on for nearly a decade. Gary Silva was a former referee in the area who passed away in 2012. Former LaGrange high wrestling coach Scooter Weathers was looking for a way to honor his friend and found it in the annual wrestling tournament that still lives on in 2022.

It was a festival of wrestling and a festive occasion for Callaway, LaGrange and Troup — who were three of the 11 teams that participated — as they had good showings in the tournament.

Played out across three mats, the tournament started at 8 a.m. and lasted into the afternoon with over 400 bouts taking place.

Blood, sweat and tears were shed as girls and boys battled it out for glory across 14 different weight classes.

In the 113 lb weight class, it was Ivey Hill who starred again. She made it all the way to the final against varsity boys and finished second place in the class. The freshman has loads of potential as she continues to impress in her first season at high school level.

Troup County had another second place finisher in the 126 lb weight class with Cam Roberts.

The Tigers had another wrestler steal the show in sophomore Elijah Ward. He finished first in the 132 lb weight class and has made major strides in his second year as a Tiger.

The 138 lb weight class had a local flair all over it. Callaway’s Elijah Copeland cleaned out the weight class and went a perfect 3-0 while Troup’s Braden Hutchins finished second and LaGrange’s Fernando Donis-Galvez earned a fourth place finish.

Troup’s big showing continued in the 144 lb. weight class with Braydon Bowen coming out on top.

The 157 lb weight class had a top-4 finisher from the three local schools. LaGrange’s Landen Harrison made it all the way to the final match and earned a second place finish. Javon Copeland of Callaway finished third and DJ Langley ended up in fourth for the Tigers.

Callaway was all over the top spots in the bigger weight classes as Calvin Williams was able to finish second in the 175 lb weight class.

LaGrange had a second place finisher in the 215 lb weight class in Tayvon Howard.

Callaway’s Jojo Shuman stole the show for the Cavaliers. He came straight off an appearance on the AA region-5 all-region team for football, Shuman dominated the 285 lb weight class and finished in first place. Troup’s Donta Dennis had a good showing as well, finishing in third place.

Troup will host the Daniel Grind tournament on Friday as the festive season of wrestling continues.